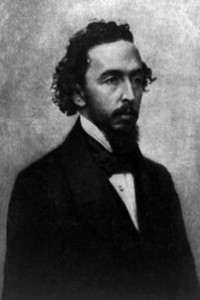 Bayard Taylor was an American poet, literary critic, translator, and travel author born in Kennett Square in Chester County, Pennsylvania. His interest in poetry was coached by influential critic and editor Rufus Wilmot Griswold, who encouraged him to produce a volume of poetry. Published at Philadelphia in 1844 under the title Ximena, or the Battle of the Sierra Morena, and other Poems was dedicated to Griswold, though it brought its author little profit; and indirectly it did him better service as the means of his introduction to The New York Tribune.

With an advance made to him on account of some journalistic work to be done in Europe, he set sail for the East. The young poet spent a happy time in roaming through certain districts of England, France, Germany and Italy; that he was a born traveller is evident from the fact that this pedestrian tour of almost two years cost him only £100. The graphic accounts which he sent from Europe to The New York Tribune, The Saturday Evening Post, and The United States Gazette were so highly appreciated that on Taylor’s return to America he was advised to throw his articles into book form. In 1846, his Views A foot, or Europe seen with Knapsack and Staff, was published with considerable popularity. (source: Wikipedia)

Beauty and The Beast, and Tales From Home (0)

Through her great capacity to love, a kind and beautiful maid releases a handsome prince from the spell which has made him an ugly beast. Generations of...read more »

At noon, on the first Saturday of March, 1796, there was an unusual stir at the old Barton farm–house, just across the creek to the eastward, as you lea...read more »