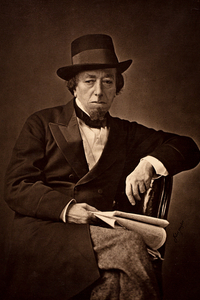 Benjamin Disraeli, 1st Earl of Beaconsfield, KG, PC, FRS, was a British Conservative politician, writer, aristocrat and dandy who twice served as Prime Minister. He played a central role in the creation of the modern Conservative Party, defining its policies and its broad outreach. Disraeli is remembered for his influential voice in world affairs, his political battles with the Liberal spokesman William Ewart Gladstone, and his one-nation conservatism or “Tory democracy”. He made the Conservatives the party most identified with the glory and power of the British Empire. He is to date the only British Prime Minister of Jewish birth.

In the 1840s Disraeli wrote a trilogy of novels with political themes. With Coningsby; or, The New Generation (1844), Disraeli, in Blake’s view, “infused the novel genre with political sensibility, espousing the belief that England’s future as a world power depended not on the complacent old guard, but on youthful, idealistic politicians.” Coningsby was followed by Sybil; or, The Two Nations (1845), another political novel, which was less idealistic and more clear-eyed than Coningsby; the “two nations” of its sub-title referred to the huge economic and social gap between the privileged few and the deprived working classes. The last in Disraeli’s political novel trilogy was Tancred; or, The New Crusade (1847), promoting the Church of England’s role in reviving Britain’s flagging spirituality.

This is one of Disreali’s best novels, not as a story, but as a study of men, manners, and principles. The plot is slight – little better than a device ...read more »

Sybil, or The Two Nations is one of the finest novels to depict the social problems of class-ridden Victorian England. When published, it was a sensatio...read more »

Tancred; or, The New Crusade is a novel by Benjamin Disraeli, first published by Henry Colburn in three volumes. Together with Coningsby (1844) and Sybi...read more »