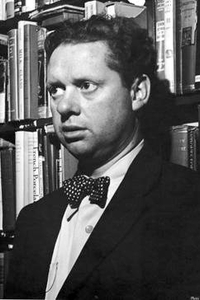 Dylan Marlais Thomas was a Welsh poet and writer whose works include “Do not go gentle into that good night”, “And death shall have no dominion”, and Under Milk Wood. Many of his works appeared in print while he was still a teenager but it was the publication of “Light breaks where no sun shines” in 1934, that caught the attention of the literary world. Although Thomas was appreciated as a popular poet in his lifetime, he found earning a living as a writer difficult, which resulted in his augmenting his income with reading tours and broadcasts. His radio recordings for the BBC during the late 1940s brought him to the public’s attention and he was used by the Corporation as a populist voice of the literary scene. In the 1950s, Thomas travelled to America, where his readings brought him a level of fame, and his erratic behaviour and drinking worsened. His time in America cemented Thomas’s legend, and he recorded to vinyl works such as A Child’s Christmas in Wales. During his fourth trip to New York in 1953 he became gravely ill and fell into a coma from which he never recovered, dying on 9 November 1953. He has been acknowledged as one of the most important Welsh poets of the 20th century and noted for his original, rhythmic and ingenious use of words and imagery. (source: Wikipedia)

During one night the audience are invited to witness the dreams of various people in the Welsh seaside town of Llaregyb including, amongst others, Capta...read more »