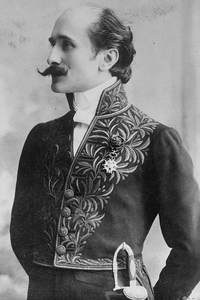 Edmond Eugène Alexis Rostand was a French poet and dramatist. He is associated with neo-romanticism, and is best known for his play Cyrano de Bergerac. Rostand’s romantic plays contrasted with the naturalistic theatre popular during the late nineteenth century. Another of Rostand’s works, Les Romanesques, was adapted to the musical comedy, The Fantasticks.

Chantecter is a fantasy play about bird and animal life, with the characters being denizens of the farmyard and the woods.

Since its premier in 1897, Edmond Rostand’s Cyrano de Bergerac has remained a classic of the world stage. With a heart as big as his nose, the poet-swor...read more »

L’Aiglon is a play in six acts based on the life of Napoleon’s son, Napoleon II of France, Duke of Reichstadt. The title comes from a nickname for Napol...read more »

This 1894 comedy in three-acts was translated by Barrett Clark. Edmond Rostand later became famous with his writing of Cyrano de Bergerac. The Romancers...read more »