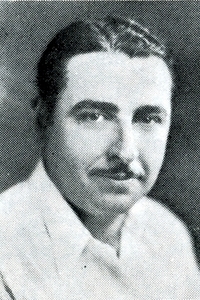 Otis Adelbert Kline born in Chicago, Illinois, USA, was an adventure novelist and literary agent during the pulp era. Much of his work first appeared in the magazine Weird Tales. He is best known for an apocryphal literary feud with fellow author Edgar Rice Burroughs, in which he supposedly raised the latter’s ire by producing close imitations (Planet of Peril and two sequels) of Burroughs’s Martian novels, though set on Venus; Burroughs, the story goes, then retaliated by writing his own Venus novels, whereupon Kline responded with an even more direct intrusion on Burroughs’s territory by boldly setting two novels on Mars. Kline’s jungle adventure stories, reminiscent of Burroughs’s Tarzan tales, have also been cited as evidence of the conflict. While the two authors did write the works in question, the theory that they did so in contention with each other is supported only circumstantially, by the resemblance and publication dates of the works themselves. (source: Wikipedia)

This astonishing science-fiction classic begins like a prophecy of today’s space achievements–a missile is fired from Earth to hit the surface of the Mo...read more »

Derring-do on a world of primitive monsters! When Robert Grandon swapped bodies with a prince of the planet Venus, he was concerned only with the thrill...read more »

Through the discoveries of the scientist, Dr. Morgan, a young Martian’s astral body is projected into the body of one Harry Thorne on Earth, and from Ea...read more »

Jerry Morgan, fed up with Earthly frustrations, found plenty to occupy him when he swapped bodies with a hot-headed Martian from that red planet’s era o...read more »

When Vernia, empress of Reabon, mightiest land of all Venus, was kidnapped by the strange marauders of the sea, it presented the Earthman, Robert Grando...read more »

Harry Thorne, outcast scion of a wealthy East Coast family, seeks the greatest adventure of his life. He exchanges bodies with his look-alike, Martian S...read more »