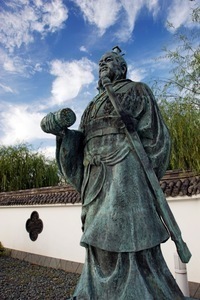 Sun Tzu (also rendered as Sun Zi) was a Chinese military general, strategist and philosopher who lived in the Spring and Autumn Period of ancient China. The name he is best known by is actually an honorific which means “Master Sun”: His birth name was Sun Wu and he was known outside of his family by his courtesy name Changqing. He is traditionally credited as the author of The Art of War, an extremely influential ancient Chinese book on military strategy. Sun Tzu has had a significant impact on Chinese and Asian history and culture, both as the author of The Art of War and as a legendary historical figure.

The Art of War is an ancient Chinese military treatise attributed to Sun Tzu, a high-ranking military general, strategist and tactician. The text is com...read more »