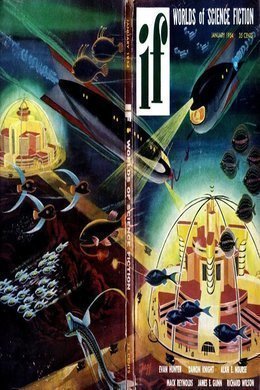 The Army had a new theme song: ‘Anything you can do, we can do better!’ And they meant anything, including up-to-date hornpipes!

General WingrGeneral Wingrove looked at the rows of faces without seeing them. His vision went beyond the Congress of the United States, past the balmy June day to another day that was coming. A day when the Army would have its destined place of authority.

He drew a deep breath and delivered what was perhaps the shortest speech ever heard in the hallowed halls of Congress:

“The General Staff of the U.S. Army requests Congress to abolish the archaic branch of the armed forces known as the U.S. Navy.”

The aging Senator from Georgia checked his hearing aid to see if it was in operating order, while the press box emptied itself in one concerted rush and a clatter of running feet that died off in the direction of the telephone room. A buzz of excited comment ran through the giant chamber. One by one the heads turned to face the Naval section where rows of blue figures stirred and buzzed like smoked-out bees. The knot of men around a paunchy figure heavy with gold braid broke up and Admiral Fitzjames climbed slowly to his feet.

Lesser men have quailed before that piercing stare, but General Wingrove was never the lesser man. The admiral tossed his head with disgust, every line of his body denoting outraged dignity. He turned to his audience, a small pulse beating in his forehead.

“I cannot comprehend the general’s attitude, nor can I understand why he has attacked the Navy in this unwarranted fashion. The Navy has existed and will always exist as the first barrier of American defense. I ask you, gentlemen, to ignore this request as you would ignore the statements of any person … er, slightly demented. I should like to offer a recommendation that the general’s sanity be investigated, and an inquiry be made as to the mental health of anyone else connected with this preposterous proposal!”

The general smiled calmly. “I understand, Admiral, and really don’t blame you for being slightly annoyed. But, please let us not bring this issue of national importance down to a shallow personal level. The Army has facts to back up this request–facts that shall be demonstrated tomorrow morning.”

Turning his back on the raging admiral, General Wingrove included all the assembled solons in one sweeping gesture.

“Reserve your judgment until that time, gentlemen, make no hasty judgments until you have seen the force of argument with which we back up our request. It is the end of an era. In the morning the Navy joins its fellow fossils, the dodo and the brontosaurus.”

The admiral’s blood pressure mounted to a new record and the gentle thud of his unconscious body striking the floor was the only sound to break the shocked silence of the giant hall.

The early morning sun warmed the white marble of the Jefferson Memorial and glinted from the soldiers’ helmets and the roofs of the packed cars that crowded forward in a slow-moving stream. All the gentlemen of Congress were there, the passage of their cars cleared by the screaming sirens of motorcycle policemen. Around and under the wheels of the official cars pressed a solid wave of government workers and common citizens of the capital city. The trucks of the radio and television services pressed close, microphones and cameras extended.

The stage was set for a great day. Neat rows of olive drab vehicles curved along the water’s edge. Jeeps and half-tracks shouldered close by weapons carriers and six-bys, all of them shrinking to insignificance beside the looming Patton tanks. A speakers’ platform was set up in the center of the line, near the audience.

At precisely 10 a.m., General Wingrove stepped forward and scowled at the crowd until they settled into an uncomfortable silence. His speech was short and consisted of nothing more than amplifications of his opening statement that actions speak louder than words. He pointed to the first truck in line, a 2½-ton filled with an infantry squad sitting stiffly at attention.

The driver caught the signal and kicked the engine into life; with a grind of gears it moved forward toward the river’s edge. There was an indrawn gasp from the crowd as the front wheels ground over the marble parapet–then the truck was plunging down toward the muddy waters of the Potomac.

The wheels touched the water and the surface seemed to sink while taking on a strange glassy character. The truck roared into high gear and rode forward on the surface of the water surrounded by a saucer-shaped depression. It parked two hundred yards off shore and the soldiers, goaded by the sergeant’s bark, leapt out and lined up with a showy present arms.