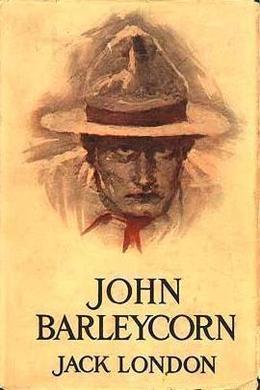 A classic biography of Jack London as a drunk; it is most likely the first thoughtful analysis on alcoholism in Amreican literture. The novel is packed full with London’s notorious adventures including his well known drinking career via the character known as John Barleycorn - a term even now given to alcohol just like the ‘demon rum.’ It is an incredible insight into London and alcoholism.

It all came to me one election day. It was on a warm California afternoon, and I had ridden down into the Valley of the Moon from the ranch to the little village to vote Yes and No to a host of proposed amendments to the Constitution of the State of California. Because of the warmth of the day I had had several drinks before casting my ballot, and divers drinks after casting it. Then I had ridden up through the vine-clad hills and rolling pastures of the ranch, and arrived at the farm-house in time for another drink and supper.

“How did you vote on the suffrage amendment?” Charmian asked.

She uttered an exclamation of surprise. For, be it known, in my younger days, despite my ardent democracy, I had been opposed to woman suffrage. In my later and more tolerant years I had been unenthusiastic in my acceptance of it as an inevitable social phenomenon.

“Now just why did you vote for it?” Charmian asked.

I answered. I answered at length. I answered indignantly. The more I answered, the more indignant I became. (No; I was not drunk. The horse I had ridden was well named “The Outlaw.” I’d like to see any drunken man ride her.)

And yet–how shall I say?–I was lighted up, I was feeling “good,” I was pleasantly jingled.

“When the women get the ballot, they will vote for prohibition,” I said. “It is the wives, and sisters, and mothers, and they only, who will drive the nails into the coffin of John Barleycorn—-“

“But I thought you were a friend to John Barleycorn,” Charmian interpolated.

“I am. I was. I am not. I never am. I am never less his friend than when he is with me and when I seem most his friend. He is the king of liars. He is the frankest truthsayer. He is the august companion with whom one walks with the gods. He is also in league with the Noseless One. His way leads to truth naked, and to death. He gives clear vision, and muddy dreams. He is the enemy of life, and the teacher of wisdom beyond life’s wisdom. He is a red-handed killer, and he slays youth.”

And Charmian looked at me, and I knew she wondered where I had got it.

I continued to talk. As I say, I was lighted up. In my brain every thought was at home. Every thought, in its little cell, crouched ready-dressed at the door, like prisoners at midnight waiting a jail-break. And every thought was a vision, bright-imaged, sharp-cut, unmistakable. My brain was illuminated by the clear, white light of alcohol. John Barleycorn was on a truth-telling rampage, giving away the choicest secrets on himself. And I was his spokesman. There moved the multitudes of memories of my past life, all orderly arranged like soldiers in some vast review. It was mine to pick and choose. I was a lord of thought, the master of my vocabulary and of the totality of my experience, unerringly capable of selecting my data and building my exposition. For so John Barleycorn tricks and lures, setting the maggots of intelligence gnawing, whispering his fatal intuitions of truth, flinging purple passages into the monotony of one’s days.

I outlined my life to Charmian, and expounded the make-up of my constitution. I was no hereditary alcoholic. I had been born with no organic, chemical predisposition toward alcohol. In this matter I was normal in my generation. Alcohol was an acquired taste. It had been painfully acquired. Alcohol had been a dreadfully repugnant thing–more nauseous than any physic. Even now I did not like the taste of it. I drank it only for its “kick.” And from the age of five to that of twenty-five I had not learned to care for its kick. Twenty years of unwilling apprenticeship had been required to make my system rebelliously tolerant of alcohol, to make me, in the heart and the deeps of me, desirous of alcohol.

I sketched my first contacts with alcohol, told of my first intoxications and revulsions, and pointed out always the one thing that in the end had won me over–namely, the accessibility of alcohol. Not only had it always been accessible, but every interest of my developing life had drawn me to it. A newsboy on the streets, a sailor, a miner, a wanderer in far lands, always where men came together to exchange ideas, to laugh and boast and dare, to relax, to forget the dull toil of tiresome nights and days, always they came together over alcohol. The saloon was the place of congregation. Men gathered to it as primitive men gathered about the fire of the squatting place or the fire at the mouth of the cave.