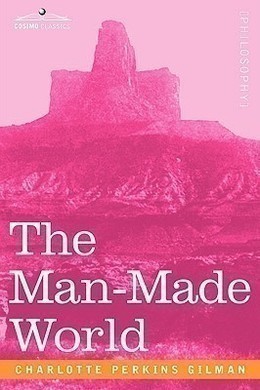 Here is a cry for feminist revolution. In this work, Charlotte Perkins Gilman details how male-dominated culture has, through the very social devices that keep it in place, conspired to produce greater human suffering than is truly necessary. In this landmark work she explains how economic status, mobility, and autonomy are at the root of the subjugation of women worldwide. For anyone wanting to understand the feminist movement, how far it has come, and how much of its ambition is yet unfulfilled, The Man-Made World is a fascinating work of philosophy and biting social commentary.

Let us begin, inoffensively, with sheep. The sheep is a beast with which we are all familiar, being much used in religious imagery; the common stock of painters; a staple article of diet; one of our main sources of clothing; and an everyday symbol of bashfulness and stupidity.

In some grazing regions the sheep is an object of terror, destroying grass, bush and forest by omnipresent nibbling; on the great plains, sheep-keeping frequently results in insanity, owing to the loneliness of the shepherd, and the monotonous appearance and behavior of the sheep.

By the poet, young sheep are preferred, the lamb gambolling gaily; unless it be in hymns, where “all we like sheep” are repeatedly described, and much stress is laid upon the straying propensities of the animal.

To the scientific mind there is special interest in the sequacity of sheep, their habit of following one another with automatic imitation. This instinct, we are told, has been developed by ages of wild crowded racing on narrow ledges, along precipices, chasms, around sudden spurs and corners, only the leader seeing when, where and how to jump. If those behind jumped exactly as he did, they lived. If they stopped to exercise independent judgment, they were pushed off and perished; they and their judgment with them.

All these things, and many that are similar, occur to us when we think of sheep. They are also ewes and rams. Yes, truly; but what of it? All that has been said was said of sheep, genus ovis, that bland beast, compound of mutton, wool, and foolishness so widely known. If we think of the sheep-dog (and dog-ess), the shepherd (and shepherd-ess), of the ferocious sheep-eating bird of New Zealand, the Kea (and Kea-ess), all these herd, guard, or kill the sheep, both rams and ewes alike. In regard to mutton, to wool, to general character, we think only of their sheepishness, not at all of their ramishness or eweishness. That which is ovine or bovine, canine, feline or equine, is easily recognized as distinguishing that particular species of animal, and has no relation whatever to the sex thereof.

Returning to our muttons, let us consider the ram, and wherein his character differs from the sheep. We find he has a more quarrelsome disposition. He paws the earth and makes a noise. He has a tendency to butt. So has a goat–Mr. Goat. So has Mr. Buffalo, and Mr. Moose, and Mr. Antelope. This tendency to plunge head foremost at an adversary–and to find any other gentleman an adversary on sight–evidently does not pertain to sheep, to genus ovis; but to any male creature with horns.

As “function comes before organ,” we may even give a reminiscent glance down the long path of evolution, and see how the mere act of butting–passionately and perpetually repeated–born of the belligerent spirit of the male–produced horns!

The ewe, on the other hand, exhibits love and care for her little ones, gives them milk and tries to guard them. But so does a goat–Mrs. Goat. So does Mrs. Buffalo and the rest. Evidently this mother instinct is no peculiarity of genus ovis, but of any female creature.

Even the bird, though not a mammal, shows the same mother-love and mother-care, while the father bird, though not a butter, fights with beak and wing and spur. His competition is more effective through display. The wish to please, the need to please, the overmastering necessity upon him that he secure the favor of the female, has made the male bird blossom like a butterfly. He blazes in gorgeous plumage, rears haughty crests and combs, shows drooping wattles and dangling blobs such as the turkey-cock affords; long splendid feathers for pure ornament appear upon him; what in her is a mere tail-effect becomes in him a mass of glittering drapery.

Partridge-cock, farmyard-cock, peacock, from sparrow to ostrich, observe his mien! To strut and languish; to exhibit every beauteous lure; to sacrifice ease, comfort, speed, everything–to beauty–for her sake–this is the nature of the he-bird of any species; the characteristic, not of the turkey, but of the cock! With drumming of loud wings, with crow and quack and bursts of glorious song, he woos his mate; displays his splendors before her; fights fiercely with his rivals. To butt–to strut–to make a noise–all for love’s sake; these acts are common to the male.