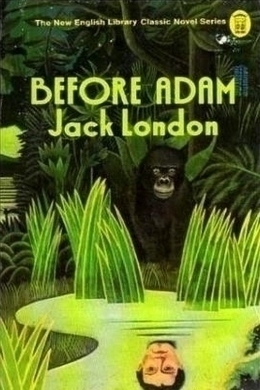 A young man in modern America is terrorized by visions of an earlier, primitive life. Across the enormous chasm of thousands of centuries, his consciousness has become entwined with that of Big-Tooth, an ancestor living at the dawn of humanity. Big-Tooth makes his home in Pleistocene Africa, a ferocious, fascinating younger world torn by incessant conflict between early humans and protohumans. Before Adam is a remarkable and provocative tale that thrust evolution further into the public spotlight in the early twentieth century and has since become a milestone of speculative fiction. The brilliance of the book lies not only in its telling but also in its imaginative projection of a mindset for early humans. Capitalizing on his recognized ability to understand animals, Jack London paints an arresting and dark portrait of how our distant ancestors thought about themselves and their world.

Pictures! Pictures! Pictures! Often, before I learned, did I wonder whence came the multitudes of pictures that thronged my dreams; for they were pictures the like of which I had never seen in real wake-a-day life. They tormented my childhood, making of my dreams a procession of nightmares and a little later convincing me that I was different from my kind, a creature unnatural and accursed.

In my days only did I attain any measure of happiness. My nights marked the reign of fear–and such fear! I make bold to state that no man of all the men who walk the earth with me ever suffer fear of like kind and degree. For my fear is the fear of long ago, the fear that was rampant in the Younger World, and in the youth of the Younger World. In short, the fear that reigned supreme in that period known as the Mid-Pleistocene.

What do I mean? I see explanation is necessary before I can tell you of the substance of my dreams. Otherwise, little could you know of the meaning of the things I know so well. As I write this, all the beings and happenings of that other world rise up before me in vast phantasmagoria, and I know that to you they would be rhymeless and reasonless.

What to you the friendship of Lop-Ear, the warm lure of the Swift One, the lust and the atavism of Red-Eye? A screaming incoherence and no more. And a screaming incoherence, likewise, the doings of the Fire People and the Tree People, and the gibbering councils of the horde. For you know not the peace of the cool caves in the cliffs, the circus of the drinking-places at the end of the day. You have never felt the bite of the morning wind in the tree-tops, nor is the taste of young bark sweet in your mouth.

It would be better, I dare say, for you to make your approach, as I made mine, through my childhood. As a boy I was very like other boys–in my waking hours. It was in my sleep that I was different. From my earliest recollection my sleep was a period of terror. Rarely were my dreams tinctured with happiness. As a rule, they were stuffed with fear–and with a fear so strange and alien that it had no ponderable quality. No fear that I experienced in my waking life resembled the fear that possessed me in my sleep. It was of a quality and kind that transcended all my experiences.

For instance, I was a city boy, a city child, rather, to whom the country was an unexplored domain. Yet I never dreamed of cities; nor did a house ever occur in any of my dreams. Nor, for that matter, did any of my human kind ever break through the wall of my sleep. I, who had seen trees only in parks and illustrated books, wandered in my sleep through interminable forests. And further, these dream trees were not a mere blur on my vision. They were sharp and distinct. I was on terms of practised intimacy with them. I saw every branch and twig; I saw and knew every different leaf.

Well do I remember the first time in my waking life that I saw an oak tree. As I looked at the leaves and branches and gnarls, it came to me with distressing vividness that I had seen that same kind of tree many and countless times in my sleep. So I was not surprised, still later on in my life, to recognize instantly, the first time I saw them, trees such as the spruce, the yew, the birch, and the laurel. I had seen them all before, and was seeing them even then, every night, in my sleep.

This, as you have already discerned, violates the first law of dreaming, namely, that in one’s dreams one sees only what he has seen in his waking life, or combinations of the things he has seen in his waking life. But all my dreams violated this law. In my dreams I never saw ANYTHING of which I had knowledge in my waking life. My dream life and my waking life were lives apart, with not one thing in common save myself. I was the connecting link that somehow lived both lives.

Early in my childhood I learned that nuts came from the grocer, berries from the fruit man; but before ever that knowledge was mine, in my dreams I picked nuts from trees, or gathered them and ate them from the ground underneath trees, and in the same way I ate berries from vines and bushes. This was beyond any experience of mine.

I shall never forget the first time I saw blueberries served on the table. I had never seen blueberries before, and yet, at the sight of them, there leaped up in my mind memories of dreams wherein I had wandered through swampy land eating my fill of them. My mother set before me a dish of the berries. I filled my spoon, but before I raised it to my mouth I knew just how they would taste. Nor was I disappointed. It was the same tang that I had tasted a thousand times in my sleep.