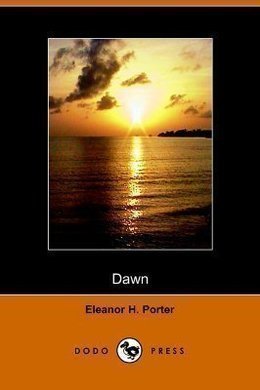 Though starkly different from Pollyanna, the book that propelled author Eleanor H. Porter to worldwide acclaim, the engrossing novel Dawn plumbs some of the same themes as its predecessor, including the importance of always maintaining an optimistic outlook on life, no matter how dire the circumstances you are facing. Set against the backdrop of World War I, the novel’s protagonist is a young man whose vision is gradually degrading. Will he continue to wallow in his despair, or will he find a way to accept his encroaching blindness?

It was on his fourteenth birthday that Keith Burton discovered the Great Terror, though he did not know it by that name until some days afterward. He knew only, to his surprise and distress, that the “Treasure Island,” given to him by his father for a birthday present, was printed in type so blurred and poor that he could scarcely read it.

He said nothing, of course. In fact he shut the book very hastily, with a quick, sidewise look, lest his father should see and notice the imperfection of his gift.

Poor father! He would feel so bad after he had taken all that pains and spent all that money–and for something not absolutely necessary, too! And then to get cheated like that. For, of course, he had been cheated–such horrid print that nobody could read.

But it was only a day or two later that Keith found some more horrid print. This time it was in his father’s weekly journal that came every Saturday morning. He found it again that night in a magazine, and yet again the next day in the Sunday newspaper.

Then, before he had evolved a satisfactory explanation in his own mind of this phenomenon, he heard Susan Betts talking with Mrs. McGuire over the back-yard fence.

“Have you heard about poor old Harrington?” she demanded in what Keith called her “excitingest” voice. Then, as was always the case when she spoke in that voice, she plunged on without waiting for a reply, as if fearful lest her bit of news fall from the other pair of lips first. “Well, he’s blind–stone blind. He couldn’t see a dollar bill–not if you shook it right before his eyes.”

“Sho! you don’t say!” Mrs. McGuire dropped the wet sheet back into the basket and came to the fence on her side concernedly. “Now, ain’t that too bad?”

“Yes, ain’t it? An’ he so kind, an’ now so blind! It jest makes me sick.” Susan whipped open the twisted folds of a wet towel. Susan seldom stopped her work to talk. “But I saw it comin’ long ago. An’ he did, too, poor man!”

Mrs. McGuire lifted a bony hand to her face and tucked a flying wisp of hair behind her right ear.

“Then if he saw it comin’, why couldn’t he do somethin’ to stop it?” she demanded.

Keith, on his knees before the beet-bed adjoining the clothes-yard, sat back on his heels and eyed the two women with frowning interest.

He knew old Mr. Harrington. So did all the boys. Never was there a kite or a gun or a jack-knife so far gone that Uncle Joe Harrington could not “fix it” somehow. And he was always so jolly about it, and so glad to do it. But it took eyes to do such things, and if now he was going to be blind–

“An’ you say it’s been comin’ on gradual?” questioned Mrs. McGuire. “Why, I hadn’t heard-“

“No, there hain’t no one heard,” interrupted Susan. “He didn’t say nothin’ ter nobody, hardly, only me, I guess, an’ I suspicioned it, or he wouldn’t ‘a’ said it to me, probably. Ye see, I found out he wa’n’t readin’ ‘em–the papers Mr. Burton has me take up ter him every week. An’ he owned up, when I took him ter task for it, that he couldn’t read ‘em. They was gettin’ all blurred.”

“Blurred?” It was a startled little cry from the boy down by the beet-bed; but neither Susan nor Mrs. McGuire heard–perhaps because at almost the same moment Mrs. McGuire had excitedly asked the same question.

“Yes; all run tergether like–the printin’, ye know–so he couldn’t tell one letter from t’other. ‘T wa’n’t only a little at first. Why, he thought ‘t was jest somethin’ the matter with the printin’ itself; an’–”

“And wasn’t_it the printing at _all?”

The boy was on his feet now. His face was a little white and strained-looking, as he asked the question.

“Why, no, dearie. Didn’t you hear Susan tell Mis’ McGuire jest now? ‘T was his eyes, an’ he didn’t know it. He was gettin’ blind, an’ that was jest the beginnin’.”

Susan’s capable hands picked up another wet towel and snapped it open by way of emphasis.

“The b-beginning?” stammered the boy. “But–but ALL beginnings don’t–don’t end like that, do they?”

Susan Betts laughed indulgently and jammed the clothespin a little deeper on to the towel.

“Bless the child! Won’t ye hear that, now?” she laughed with a shrug. “An’ how should I know? I guess if Susan Betts could tell the end of all the beginnin’s as soon as they’re begun, she wouldn’t be hangin’ out your daddy’s washin’, my boy. She’d be sittin’ on a red velvet sofa with a gold cupola over her head a-chargin’ five dollars apiece for tellin’ yer fortune. Yes, sir, she would!”

“But–but about Uncle Joe,” persisted the boy. “Can’t he really see–at all, Susan?”