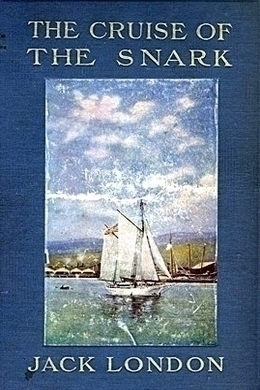 The Cruise of the Snark

The Snark had two masts and was 43 feet long at the waterline, and on it London claims to have spent thirty thousand dollars. The snark was primarily a sailboat, however, it also had an auxiliary 70-horsepower engine. It was further equipped with one lifeboat. In 1906, Author Jack London began to build a 45-foot yacht on which he planned a round-the-world voyage, to last seven years. After many delays, Jack and Charmian London and a small crew sailed out of San Francisco Bay on April 23, 1907, bound for the South Pacific

It began in the swimming pool at Glen Ellen. Between swims it was our wont to come out and lie in the sand and let our skins breathe the warm air and soak in the sunshine. Roscoe was a yachtsman. I had followed the sea a bit. It was inevitable that we should talk about boats. We talked about small boats, and the seaworthiness of small boats. We instanced Captain Slocum and his three years’ voyage around the world in the Spray.

We asserted that we were not afraid to go around the world in a small boat, say forty feet long. We asserted furthermore that we would like to do it. We asserted finally that there was nothing in this world we’d like better than a chance to do it.

Then I asked Charmian privily if she’d really care to do it, and she said that it was too good to be true.

The next time we breathed our skins in the sand by the swimming pool I said to Roscoe, “Let us do it.”

I was in earnest, and so was he, for he said:

“When shall we start?”

I had a house to build on the ranch, also an orchard, a vineyard, and several hedges to plant, and a number of other things to do. We thought we would start in four or five years. Then the lure of the adventure began to grip us. Why not start at once? We’d never be younger, any of us. Let the orchard, vineyard, and hedges be growing up while we were away. When we came back, they would be ready for us, and we could live in the barn while we built the house.

So the trip was decided upon, and the building of the Snark began. We named her the Snark because we could not think of any other name—this information is given for the benefit of those who otherwise might think there is something occult in the name.

Our friends cannot understand why we make this voyage. They shudder, and moan, and raise their hands. No amount of explanation can make them comprehend that we are moving along the line of least resistance; that it is easier for us to go down to the sea in a small ship than to remain on dry land, just as it is easier for them to remain on dry land than to go down to the sea in the small ship. This state of mind comes of an undue prominence of the ego. They cannot get away from themselves. They cannot come out of themselves long enough to see that their line of least resistance is not necessarily everybody else’s line of least resistance. They make of their own bundle of desires, likes, and dislikes a yardstick wherewith to measure the desires, likes, and dislikes of all creatures. This is unfair. I tell them so. But they cannot get away from their own miserable egos long enough to hear me. They think I am crazy. In return, I am sympathetic. It is a state of mind familiar to me. We are all prone to think there is something wrong with the mental processes of the man who disagrees with us.

The ultimate word is I LIKE. It lies beneath philosophy, and is twined about the heart of life. When philosophy has maundered ponderously for a month, telling the individual what he must do, the individual says, in an instant, “I LIKE,” and does something else, and philosophy goes glimmering. It is I LIKE that makes the drunkard drink and the martyr wear a hair shirt; that makes one man a reveller and another man an anchorite; that makes one man pursue fame, another gold, another love, and another God. Philosophy is very often a man’s way of explaining his own I LIKE.

But to return to the Snark, and why I, for one, want to journey in her around the world. The things I like constitute my set of values. The thing I like most of all is personal achievement—not achievement for the world’s applause, but achievement for my own delight. It is the old “I did it! I did it! With my own hands I did it!” But personal achievement, with me, must be concrete. I’d rather win a water-fight in the swimming pool, or remain astride a horse that is trying to get out from under me, than write the great American novel. Each man to his liking. Some other fellow would prefer writing the great American novel to winning the water-fight or mastering the horse.