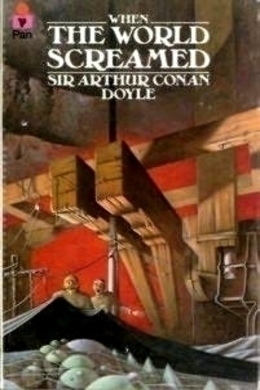 When the World Screamed

Professor Challenger drills into the earth until he reaches the mantle, convinced that it is a sentient being and that by doing so he will be the first person to alert it to mankind’s presence. He awakens the giant creature, which then proceeds to destroy his machine.

I had a vague recollection of having heard my friend Edward Malone, of the Gazette, speak of Professor Challenger, with whom he had been associated in some remarkable adventures. I am so busy, however, with my own profession, and my firm has been so overtaxed with orders, that I know little of what is going on in the world outside my own special interests. My general recollection was that Challenger has been depicted as a wild genius of a violent and intolerant disposition. I was greatly surprised to receive a business communication from him which was in the following terms:

‘I have occasion to engage the services of an expert in Artesian borings. I will not conceal from you that my opinion of experts is not a high one, and that I have usually found that a man who, like myself, has a well-equipped brain can take a sounder and broader view than the man who professes a special knowledge (which, alas, is so often a mere profession), and is therefore limited in his outlook. None the less, I am disposed to give you a trial. Looking down the list of Artesian authorities, a certain oddity–I had almost written absurdity–in your name attracted my attention, and I found upon inquiry that my young friend, Mr. Edward Malone, was actually acquainted with you. I am therefore writing to say that I should be glad to have an interview with you, and that if you satisfy my requirements, and my standard is no mean one, I may be inclined to put a most important matter into your hands. I can say no more at present as the matter is of extreme secrecy, which can only be discussed by word of mouth. I beg, therefore, that you will at once cancel any engagement which you may happen to have, and that you will call upon me at the above address at 10.30 in the morning of next Friday. There is a scraper as well as a mat, and Mrs. Challenger is most particular.

I handed this letter to my chief clerk to answer, and he informed the Professor that Mr. Peerless Jones would be glad to keep the appointment as arranged. It was a perfectly civil business note, but it began with the phrase: ‘Your letter (undated) has been received.’

This drew a second epistle from the Professor:

‘Sir,’ he said and his writing looked like a barbed wire fence–‘I observe that you animadvert upon the trifle that my letter was undated. Might I draw your attention to the fact that, as some return for a monstrous taxation, our Government is in the habit of affixing a small circular sign or stamp upon the outside on the envelope which notifies the date of posting? Should this sign be missing or illegible your remedy lies with the proper postal authorities. Meanwhile, I would ask you to confine your observations to matters which concern the business over which I consult you, and to cease to comment upon the form which my own letters may assume. ‘

It was clear to me that I was dealing with a lunatic, so I thought it well before I went any further in the matter to call upon my friend Malone, whom I had known since the old days when we both played Rugger for Richmond. I found him the same jolly Irishman as ever, and much amused at my first brush with Challenger.

‘That’s nothing, my boy,’ said he. ‘You’ll feel as if you had been skinned alive when you have been with him five minutes. He beats the world for offensiveness.’

‘But why should the world put up with it?’

‘Bless you, he would think nothing of throwing you downstairs if you have a disagreement. He is a primitive cave-man in a lounge suit. I can see him with a club in one hand and a jagged bit of flint in the other. Some people are born out of their proper century, but he is born out of his millennium. He belongs to the early neolithic or thereabouts.’

‘And he a professor!’

‘There is the wonder of it! It’s the greatest brain in Europe, with a driving force behind it that can turn all his dreams into facts. They do all they can to hold him back for his colleagues hate him like poison, but a lot of trawlers might as well try to hold back the Berengaria. He simply ignores them and steams on his way.’

‘Well,’ said I, ‘one thing is clear. I don’t want to have anything to do with him. I’ll cancel that appointment.’