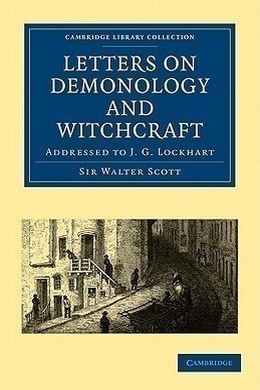 Letters on Demonology and Witchcraft

The notion that witchcraft faded away with the onset of the scientific revolution is entirely mistaken. Sir Walter Scott wrote this volume for his son-in-law & biographer J. G. Lockhart. It stands in the grand tradition of writing on witchcraft & suggests that magic was alive & well in 19th-century Scotland, as contemporary newspaper reports confirm. Carefully researched, alive with stories drawn from his own & contemporaries’ experience, & ranging in subject matter from ghosts & fairies to witches & astrologers, the ÔLetters’ inform, enliven, & entertain as they try to wed 19th-century skepticism with evidence which contradicts it. Letters has been a major source of reference ever since it was published.

You have asked of me, my dear friend, that I should assist the “Family Library” with the history of a dark chapter in human nature, which the increasing civilization of all well-instructed countries has now almost blotted out, though the subject attracted no ordinary degree of consideration in the older times of their history.

Among much reading of my earlier days, it is no doubt true that I travelled a good deal in the twilight regions of superstitious disquisitions. Many hours have I lost–“I would their debt were less!”–in examining old as well as more recent narratives of this character, and even in looking into some of the criminal trials so frequent in early days, upon a subject which our fathers considered as a matter of the last importance. And, of late years, the very curious extracts published by Mr. Pitcairn, from the Criminal Records of Scotland, are, besides their historical value, of a nature so much calculated to illustrate the credulity of our ancestors on such subjects, that, by perusing them, I have been induced more recently to recall what I had read and thought upon the subject at a former period.

As, however, my information is only miscellaneous, and I make no pretensions, either to combat the systems of those by whom I am anticipated in consideration of the subject, or to erect any new one of my own, my purpose is, after a general account of Demonology and Witchcraft, to confine myself to narratives of remarkable cases, and to the observations which naturally and easily arise out of them;–in the confidence that such a plan is, at the present time of day, more likely to suit the pages of a popular miscellany, than an attempt to reduce the contents of many hundred tomes, from the largest to the smallest size, into an abridgement, which, however compressed, must remain greatly too large for the reader’s powers of patience.

A few general remarks on the nature of Demonology, and the original cause of the almost universal belief in communication betwixt mortals and beings of a power superior to themselves, and of a nature not to be comprehended by human organs, are a necessary introduction to the subject.

The general, or, it may be termed, the universal belief of the inhabitants of the earth, in the existence of spirits separated from the encumbrance and incapacities of the body, is grounded on the consciousness of the divinity that speaks in our bosoms, and demonstrates to all men, except the few who are hardened to the celestial voice, that there is within us a portion of the divine substance, which is not subject to the law of death and dissolution, but which, when the body is no longer fit for its abode, shall seek its own place, as a sentinel dismissed from his post. Unaided by revelation, it cannot be hoped that mere earthly reason should be able to form any rational or precise conjecture concerning the destination of the soul when parted from the body; but the conviction that such an indestructible essence exists, the belief expressed by the poet in a different sense, Non omnis moriar must infer the existence of many millions of spirits who have not been annihilated, though they have become invisible to mortals who still see, hear, and perceive, only by means of the imperfect organs of humanity. Probability may lead some of the most reflecting to anticipate a state of future rewards and punishments; as those experienced in the education of the deaf and dumb find that their pupils, even while cut off from all instruction by ordinary means, have been able to form, out of their own unassisted conjectures, some ideas of the existence of a Deity, and of the distinction between the soul and body–a circumstance which proves how naturally these truths arise in the human mind. The principle that they do so arise, being taught or communicated, leads to further conclusions.

These spirits, in a state of separate existence, being admitted to exist, are not, it may be supposed, indifferent to the affairs of mortality, perhaps not incapable of influencing them. It is true that, in a more advanced state of society, the philosopher may challenge the possibility of a separate appearance of a disembodied spirit, unless in the case of a direct miracle, to which, being a suspension of the laws of nature, directly wrought by the Maker of these laws, for some express purpose, no bound or restraint can possibly be assigned. But under this necessary limitation and exception, philosophers might plausibly argue that, when the soul is divorced from the body, it loses all those qualities which made it, when clothed with a mortal shape, obvious to the organs of its fellow-men.