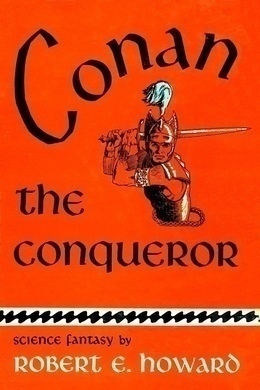 The Hour of the Dragon

The Hour of the Dragon, also known as Conan the Conqueror, is a fantasy novel written by Robert E. Howard featuring his seminal sword and sorcery hero Conan the Cimmerian. It was the last Conan story published before Howard’s suicide although not the last to be written. The plot is a loosely based melange of motifs from previous Conan short stories, most notably The Scarlet Citadel, with which it shares an almost identical storyline. It takes place when Conan is about forty-five, during his reign as King of Aquilonia, and follows a plot by a group of conspirators to depose him in favor of Valerius, heir to Conan’s predecessor Numedides, whom he had slain to gain the throne.

The long tapers flickered, sending the black shadows wavering along the walls, and the velvet tapestries rippled. Yet there was no wind in the chamber. Four men stood about the ebony table on which lay the green sarcophagus that gleamed like carven jade. In the upraised right hand of each man a curious black candle burned with a weird greenish light. Outside was night and a lost wind moaning among the black trees.

Inside the chamber was tense silence, and the wavering of the shadows, while four pairs of eyes, burning with intensity, were fixed on the long green case across which cryptic hieroglyphics writhed, as if lent life and movement by the unsteady light. The man at the foot of the sarcophagus leaned over it and moved his candle as if he were writing with a pen, inscribing a mystic symbol in the air. Then he set down the candle in its black gold stick at the foot of the case, and, mumbling some formula unintelligible to his companions, he thrust a broad white hand into his fur-trimmed robe. When he brought it forth again it was as if he cupped in his palm a ball of living fire.

The other three drew in their breath sharply, and the dark, powerful man who stood at the head of the sarcophagus whispered: ‘The Heart of Ahriman!’ The other lifted a quick hand for silence. Somewhere a dog began howling dolefully, and a stealthy step padded outside the barred and bolted door. But none looked aside from the mummy-case over which the man in the ermine-trimmed robe was now moving the great flaming jewel while he muttered an incantation that was old when Atlantis sank. The glare of the gem dazzled their eyes, so that they could not be sure of what they saw; but with a splintering crash, the carven lid of the sarcophagus burst outward as if from some irresistible pressure applied from within, and the four men, bending eagerly forward, saw the occupant–a huddled, withered, wizened shape, with dried brown limbs like dead wood showing through moldering bandages.

‘Bring that thing back?’ muttered the small dark man who stood on the right, with a short sardonic laugh. ‘It is ready to crumble at a touch. We are fools–’

‘Shhh!’ It was an urgent hiss of command from the large man who held the jewel. Perspiration stood upon his broad white forehead and his eyes were dilated. He leaned forward, and, without touching the thing with his hand, laid on the breast of the mummy the blazing jewel. Then he drew back and watched with fierce intensity, his lips moving in soundless invocation.

It was as if a globe of living fire flickered and burned on the dead, withered bosom. And breath sucked in, hissing, through the clenched teeth of the watchers. For as they watched, an awful transmutation became apparent. The withered shape in the sarcophagus was expanding, was growing, lengthening. The bandages burst and fell into brown dust. The shriveled limbs swelled, straightened. Their dusky hue began to fade.

‘By Mitra!’ whispered the tall, yellow-haired man on the left. ‘He was not a Stygian. That part at least was true.’

Again a trembling finger warned for silence. The hound outside was no longer howling. He whimpered, as with an evil dream, and then that sound, too, died away in silence, in which the yellow-haired man plainly heard the straining of the heavy door, as if something outside pushed powerfully upon it. He half turned, his hand at his sword, but the man in the ermine robe hissed an urgent warning: ‘Stay! Do not break the chain! And on your life do not go to the door!’

The yellow-haired man shrugged and turned back, and then he stopped short, staring. In the jade sarcophagus lay a living man: a tall, lusty man, naked, white of skin, and dark of hair and beard. He lay motionless, his eyes wide open, and blank and unknowing as a newborn babe’s. On his breast the great jewel smoldered and sparkled.

The man in ermine reeled as if from some let-down of extreme tension.

‘Ishtar!’ he gasped. ‘It is Xaltotun!–and he lives! Valerius! Tarascus! Amalric! Do you see? Do you see? You doubted me–but I have not failed! We have been close to the open gates of hell this night, and the shapes of darkness have gathered close about us–aye, they followed him to the very door–but we have brought the great magician back to life.’

‘And damned our souls to purgatories everlasting, I doubt not,’ muttered the small, dark man, Tarascus.

‘What purgatory can be worse than life itself? So we are all damned together from birth. Besides, who would not sell his miserable soul for a throne?’

‘There is no intelligence in his stare, Orastes,’ said the large man.

‘He has long been dead,’ answered Orastes. ‘He is as one newly awakened. His mind is empty after the long sleep–nay, he was dead, not sleeping. We brought his spirit back over the voids and gulfs of night and oblivion. I will speak to him.’