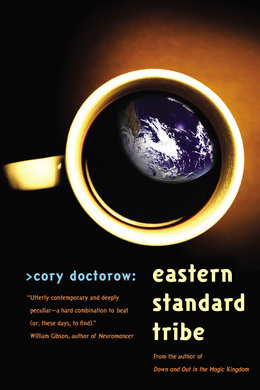 Art is an up-and-coming interface designer, working on the management of data flow along the Massachusetts Turnpike. He’s doing the best work of his career and can guarantee that the system will be the most counterintuitive, user-hostile piece of software ever pushed forth into the world. Why? Because Art is an industrial saboteur.

The explanation, like all good propaganda, is stirring and stilted, and not particularly accurate, and gummy as the hook from a top-40 song, sticky in your mind in the sleep-deprived noontime when the world takes on a hallucinatory hypperreal clarity. Like now as I sit here in my underwear on the roof of a sanatorium in the back woods off Route 128, far enough from the perpetual construction of Boston that it’s merely a cloud of dust like a herd of distant buffalo charging the plains. Like now as I sit here with a pencil up my nose, thinking about homebrew lobotomies and wouldn’t it be nice if I gave myself one.

School! We sat in English class and we dissected the stories that I’d escaped into, laid open their abdomens and tagged their organs, covered their genitals with polite sterile drapes, recorded dutiful notes en masse that told us what the story was about, but never what the story was. Stories are propaganda, virii that slide past your critical immune system and insert themselves directly into your emotions. Kill them and cut them open and they’re as naked as a nightclub in daylight.

The theme. The first step in dissecting a story is euthanizing it: “What is the theme of this story?”

Let me kill my story before I start it, so that I can dissect it and understand it. The theme of this story is: “Would you rather be smart or happy?”

Art Berry was born to argue.

There are born assassins. Bred to kill, raised on cunning and speed, they are the stuff of legend, remorseless and unstoppable. There are born ballerinas, confectionery girls whose parents subject them to rigors every bit as intense as the tripwire and poison on which the assassins are reared. There are children born to practice medicine or law; children born to serve their nations and die heroically in the noble tradition of their forebears; children born to tread the boards or shred the turf or leave smoking rubber on the racetrack.

Art’s earliest memory: a dream. He is stuck in the waiting room of one of the innumerable doctors who attended him in his infancy. He is perhaps three, and his attention span is already as robust as it will ever be, and in his dream – which is fast becoming a nightmare – he is bored silly.

The only adornment in the waiting room is an empty cylinder that once held toy blocks. Its label colorfully illustrates the blocks, which look like they’d be a hell of a lot of fun, if someone hadn’t lost them all.

Near the cylinder is a trio of older children, infinitely fascinating. They confer briefly, then do something to the cylinder, and it unravels, extruding into the third dimension, turning into a stack of blocks.

Aha! thinks Art, on waking. This is another piece of the secret knowledge that older people possess, the strange magic that is used to operate cars and elevators and shoelaces.

Art waits patiently over the next year for a grownup to show him how the blocks-from-pictures trick works, but none ever does. Many other mysteries are revealed, each one more disappointingly mundane than the last: even flying a plane seemed easy enough when the nice stew let him ride up in the cockpit for a while en route to New York – Art’s awe at the complexity of adult knowledge fell away. By the age of five, he was stuck in a sort of perpetual terrible twos, fearlessly shouting “no” at the world’s every rule, arguing the morals and reason behind them until the frustrated adults whom he was picking on gave up and swatted him or told him that that was just how it was.

In the Easter of his sixth year, an itchy-suited and hard-shoed visit to church with his Gran turned into a raging holy war that had the parishioners and the clergy arguing with him in teams and relays.