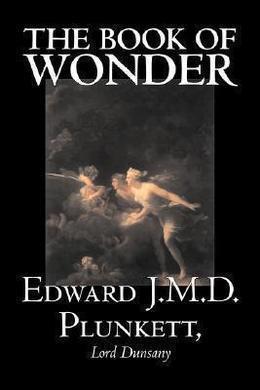 The Book of Wonder

Not only does any tale which crosshatches between this world and Faerie owe a founder’s debt to Lord Dunsany, but the secondary world created by J.R.R. Tolkien–from which almost all fantasy lands have devolved–also took shape and flower from Dunsany’s example. The Book of Wonder is Dunsany at his peak of his talent. The stories here are a lush tapestry of language, conjuring images of people, places, and things which cannot possibly exist, yet somehow ring true. They are, in short, full of wonder. Together with Dunsany’s other major collections, A Dreamer’s Tales and Tales of Three Hemispheres, they are a necessary part of any fantasy collection.

In the morning of his two hundred and fiftieth year Shepperalk the centaur went to the golden coffer, wherein the treasure of the centaurs was, and taking from it the hoarded amulet that his father, Jyshak, in the years of his prime, had hammered from mountain gold and set with opals bartered from the gnomes, he put it upon his wrist, and said no word, but walked from his mother’s cavern. And he took with him too that clarion of the centaurs, that famous silver horn, that in its time had summoned to surrender seventeen cities of Man, and for twenty years had brayed at star-girt walls in the Siege of Tholdenblarna, the citadel of the gods, what time the centaurs waged their fabulous war and were not broken by any force of arms, but retreated slowly in a cloud of dust before the final miracle of the gods that They brought in Their desperate need from Their ultimate armoury. He took it and strode away, and his mother only sighed and let him go.

She knew that today he would not drink at the stream coming down from the terraces of Varpa Niger, the inner land of the mountains, that today he would not wonder awhile at the sunset and afterwards trot back to the cavern again to sleep on rushes pulled by rivers that know not Man. She knew that it was with him as it had been of old with his father, and with Goom the father of Jyshak, and long ago with the gods. Therefore she only sighed and let him go.

But he, coming out from the cavern that was his home, went for the first time over the little stream, and going round the corner of the crags saw glittering beneath him the mundane plain. And the wind of the autumn that was gilding the world, rushing up the slopes of the mountain, beat cold on his naked flanks. He raised his head and snorted.

“I am a man-horse now!” he shouted aloud; and leaping from crag to crag he galloped by valley and chasm, by torrent-bed and scar of avalanche, until he came to the wandering leagues of the plain, and left behind him for ever the Athraminaurian mountains.

His goal was Zretazoola, the city of Sombelenë. What legend of Sombelenë’s inhuman beauty or of the wonder of her mystery had ever floated over the mundane plain to the fabulous cradle of the centaurs’ race, the Athraminaurian mountains, I do not know. Yet in the blood of man there is a tide, an old sea-current rather, that is somehow akin to the twilight, which brings him rumours of beauty from however far away, as driftwood is found at sea from islands not yet discovered: and this spring-tide of current that visits the blood of man comes from the fabulous quarter of his lineage, from the legendary, the old; it takes him out to the woodlands, out to the hills; he listens to ancient song. So it may be that Shepperalk’s fabulous blood stirred in those lonely mountains away at the edge of the world to rumours that only the airy twilight knew and only confided secretly to the bat, for Shepperalk was more legendary even than man. Certain it was that he headed from the first for the city of Zretazoola, where Sombelenë in her temple dwelt; though all the mundane plain, its rivers and mountains, lay between Shepperalk’s home and the city he sought.

When first the feet of the centaur touched the grass of that soft alluvial earth he blew for joy upon the silver horn, he pranced and caracoled, he gambolled over the leagues; pace came to him like a maiden with a lamp, a new and beautiful wonder; the wind laughed as it passed him. He put his head down low to the scent of the flowers, he lifted it up to be nearer the unseen stars, he revelled through kingdoms, took rivers in his stride; how shall I tell you, ye that dwell in cities, how shall I tell you what he felt as he galloped? He felt for strength like the towers of Bel-Narana; for lightness like those gossamer palaces that the fairy-spider builds ‘twixt heaven and sea along the coasts of Zith; for swiftness like some bird racing up from the morning to sing in some city’s spires before daylight comes. He was the sworn companion of the wind. For joy he was as a song; the lightnings of his legendary sires, the earlier gods, began to mix with his blood; his hooves thundered. He came to the cities of men, and all men trembled, for they remembered the ancient mythical wars, and now they dreaded new battles and feared for the race of man. Not by Clio are these wars recorded; history does not know them, but what of that? Not all of us have sat at historians’ feet, but all have learned fable and myth at their mothers’ knees. And there were none that did not fear strange wars when they saw Shepperalk swerve and leap along the public ways. So he passed from city to city.