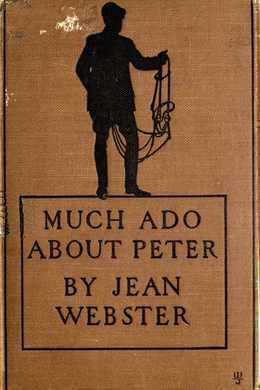 Much Ado About Peter

We follow Peter’s life while working as a groom for the wealthy Carter family. He has to deal with rowdy young children of his upper class employers, who tend to both look down and up to Peter. There’s plenty of slap stick humor with pranks and tricks being played by the children. Later, Peter starts making odd and questionable decisions, but all ends up well.

Peter and Billy, the two upper grooms at Willowbrook, were polishing the sides of the tall mail phaeton with chamois-skin rubbers and whistling, each a different tune, as they worked. So intent were they upon this musical controversy that they were not aware of Mrs. Carter’s approach until her shadow darkened the carriage-house doorway. She gathered up her skirts in both hands and gingerly stepped inside. Peter had been swashing water about with a liberal hand, and the carriage-house floor was damp.

“Where is Joe?” she inquired.

“He’s out in the runway, ma’am, jumpin’ Blue Gipsy. Shall I call him, ma’am?” Billy answered, as the question appeared to be addressed to him.

She advanced into the room, walking as nearly as possible on her heels. It was something of a feat; Mrs. Carter was not so light as she had been twenty-five years before. Peter followed her movements with a shade of speculative wonder in his eye; should she slip it would be an undignified exhibition. There was even a shade of hope beneath his respectful gaze.

“Why do you use so much water, Peter? Is it necessary to get the floor so wet?”

“It is very unpleasant to walk in.”

Peter winked at Billy with his off eye, and stood at attention until she should have finished her examination of the newly washed phæton.

“The cushions are dripping wet,” she observed.

“I washed ‘em on purpose, ma’am. They was spattered thick with mud.”

“There is danger of spoiling the leather if you put on too much water.”

She turned to an inspection of the rest of the room, sniffing dubiously in the corner where the harness greasing was carried on, and lifting her skirts a trifle higher.

“It’s disgustingly dirty,” she commented, “but I suppose you can’t help it.”

“Well,” she resumed, returning to her errand with an appearance of reluctance, “I want you, William–or Peter either, it doesn’t matter which–to drive into the village this evening to meet the eight-fifteen train from the city. I am expecting a new maid. Take Trixy and the buckboard and bring her trunk out with you. Eight-fifteen, remember,” she added as she turned toward the doorway. “Be sure to be on time, for she won’t know what to do.”

They watched in silence her gradual retreat to the house. She stopped once or twice to examine critically a clipped shrub or a freshly spaded flower-bed, but she finally passed out of hearing. Billy uttered an eloquent grunt; while Peter hitched up his trousers in both hands and commenced a tour of the room on his heels.

“William,” he squeaked in a high falsetto, “you’ve spilt a great deal more water than is necessary on this here floor. You’d ought to be more careful; it will warp the boards.”

“An’ goodness me! What is this horrid stuff in this box?” He sniffed daintily at the harness grease. “How many times must I tell you, William, that I don’t want anything like that on my harnesses? I want them washed in nice, clean soap an’ water, with a little dash of ee-oo-dee cologne.”

“An’ now, Peter,” Peter resumed, addressing an imaginary self, “I am expectin’ a new maid to-night–a pretty little French maid just like Annette. I am sure that she will like you better than any o’ the other men, so I wish you to meet her at the eight-fifteen train. Be sure to be on time, for the poor little thing won’t know what to do.”

“She didn’t either,” said Peter, quickly reassuming his proper person. “She said either of us, which ever was most convenient, an’ I’ve got to go into town anyway on an errand for Miss Ethel.”

“Hey, Joe,” called Billy, as the coachman’s steps were heard approaching down the length of the stable, “Mrs. Carter come out here an’ said I was to meet a new maid to-night, an’ Pete says he’s goin’ to. Just come an’ tell him to mind ‘is own business.”

Joe appeared in the doorway, with a cap cocked on the side of his head, and a short bull-dog pipe in his mouth. It was strictly against the rules to smoke in the stables, but Joe had been autocrat so long that he made his own rules. He could trust himself–but woe to the groom who so much as scratched a safety-match within his domain.

“A new maid is it?” he inquired, as a grin of comprehension leisurely spread itself across his good-natured rubicund face. “I s’pose you’re thinking it’s pretty near your turn, hey, Billy?”