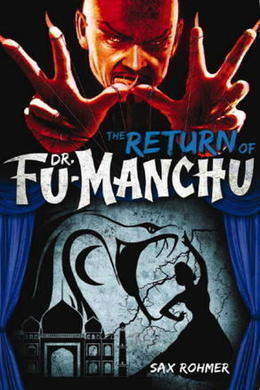 Dr. Fu Manchu lives! He has managed to survive the fire in the cottage and has returned to further the plans of his secret society. Dr. Petrie and Nayland Smith must again fight this nefarious villain before he succeeds. This time, he’s after Reverend Eltham in order to obtain the name of a secret agent in China. But lo! He does not do these things himself. He summons deadly and magical creatures to do his bidding. Dr. Petrie and Nayland Smith must, once again, track down Dr. Fu Manchu before their lives are extinguished by his henchmen!

“When did you last hear from Nayland Smith?” asked my visitor.

I paused, my hand on the siphon, reflecting for a moment.

“Two months ago,” I said: “he’s a poor correspondent and rather soured, I fancy.”

“Some affair of that sort. He’s such a reticent beggar, I really know very little about it.”

I placed a whisky and soda before the Rev. J. D. Eltham, also sliding the tobacco jar nearer to his hand. The refined and sensitive face of the clergyman offered no indication to the truculent character of the man. His scanty fair hair, already grey over the temples, was silken and soft-looking: in appearance he was indeed a typical English churchman; but in China he had been known as “the fighting missionary,” and had fully deserved the title. In fact, this peaceful-looking gentleman had directly brought about the Boxer Risings!

“You know,” he said in his clerical voice, but meanwhile stuffing tobacco into an old pipe with fierce energy, “I have often wondered, Petrie–I have never left off wondering–”

“That accursed Chinaman! Since the cellar place beneath the site of the burnt-out cottage in Dulwich Village–I have wondered more than ever.”

He lighted his pipe and walked to the hearth to throw the match in the grate.

“You see,” he continued, peering across at me in his oddly nervous way–“one never knows, does one? If I thought that Dr. Fu-Manchu lived; if I seriously suspected that that stupendous intellect, that wonderful genius, Petrie, er”–he hesitated characteristically–“survived, I should feel it my duty–”

“Well?” I said, leaning my elbows on the table and smiling slightly.

“If that Satanic genius were not indeed destroyed, then the peace of the world might be threatened anew at any moment!”

He was becoming excited, shooting out his jaw in the truculent manner I knew, and snapping his fingers to emphasize his words; a man composed of the oddest complexities that ever dwelt beneath a clerical frock.

“He may have got back to China, doctor!” he cried, and his eyes had the fighting glint in them. “Could you rest in peace if you thought that he lived? Should you not fear for your life every time that a night-call took you out alone? Why, man alive, it is only two years since he was here amongst us, since we were searching every shadow for those awful green eyes! What became of his band of assassins–his stranglers, his dacoits, his damnable poisons and insects and what-not–the army of creatures–”

He paused, taking a drink.

“You”–he hesitated diffidently–“searched in Egypt with Nayland Smith, did you not?”

“Contradict me if I am wrong,” he continued; “but my impression is that you were searching for the girl–the girl–Kâramanèh, I think she was called?”

“Yes,” I replied shortly; “but we could find no trace–no trace.”

“More than I knew,” I replied, “until I realized that I had–lost her.”

“I never met Kâramanèh, but from your account, and from others, she was quite unusually–”

“She was very beautiful,” I said, and stood up, for I was anxious to terminate that phase of the conversation.

Eltham regarded me sympathetically; he knew something of my search with Nayland Smith for the dark-eyed Eastern girl who had brought romance into my drab life; he knew that I treasured my memories of her as I loathed and abhorred those of the fiendish, brilliant Chinese doctor who had been her master.

Eltham began to pace up and down the rug, his pipe bubbling furiously; and something in the way he carried his head reminded me momentarily of Nayland Smith. Certainly, between this pink-faced clergyman, with his deceptively mild appearance, and the gaunt, bronzed and steely-eyed Burmese commissioner, there was externally little in common; but it was some little nervous trick in his carriage that conjured up through the smoke-haze one distant summer evening when Smith had paced that very room as Eltham paced it now, when before my startled eyes he had rung up the curtain upon the savage drama in which, though I little suspected it then, Fate had cast me for a leading rôle.

I wondered if Eltham’s thoughts ran parallel with mine. My own were centred upon the unforgettable figure of the murderous Chinaman. These words, exactly as Smith had used them, seemed once again to sound in my ears: “Imagine a person, tall, lean and feline, high-shouldered, with a brow like Shakespeare and a face like Satan, a close-shaven skull and long magnetic eyes of the true cat green. Invest him with all the cruel cunning of an entire Eastern race accumulated in one giant intellect, with all the resources of science, past and present, and you have a mental picture of Dr. Fu-Manchu, the ‘Yellow Peril’ incarnate in one man.”

This visit of Eltham’s no doubt was responsible for my mood; for this singular clergyman had played his part in the drama of two years ago.