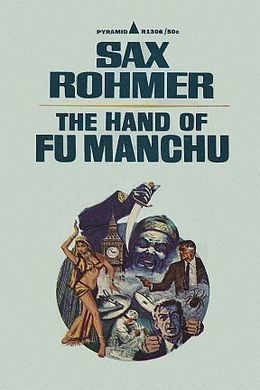 Being a New Phase in the Activities of the Devil Doctor

Sir Gregory Hale returns to London from Mongolia with a mysterious Tulun-Nur chest that holds the ‘key to India’, a vital secret of the Fu Manchu’s notorious Si-Fan organization. Unfortunately Hale is murdered before he is able to disclose the secret to Nayland Smith. The Burmese police commissioner and Dr. Petrie launch a mission to affront the brilliant but deadly master criminal before he succeeds in his malignant and fantastic plot to take over the world.

“Who’s there?” I called sharply.

I turned and looked across the room. The window had been widely opened when I entered, and a faint fog haze hung in the apartment, seeming to veil the light of the shaded lamp. I watched the closed door intently, expecting every moment to see the knob turn. But nothing happened.

“Who’s there?” I cried again, and, crossing the room, I threw open the door.

The long corridor without, lighted only by one inhospitable lamp at a remote end, showed choked and yellowed with this same fog so characteristic of London in November. But nothing moved to right nor left of me. The New Louvre Hotel was in some respects yet incomplete, and the long passage in which I stood, despite its marble facings, had no air of comfort or good cheer; palatial it was, but inhospitable.

I returned to the room, reclosing the door behind me, then for some five minutes or more I stood listening for a repetition of that mysterious sound, as of something that both dragged and tapped, which already had arrested my attention. My vigilance went unrewarded. I had closed the window to exclude the yellow mist, but subconsciously I was aware of its encircling presence, walling me in, and now I found myself in such a silence as I had known in deserts but could scarce have deemed possible in fog-bound London, in the heart of the world’s metropolis, with the traffic of the Strand below me upon one side and the restless life of the river upon the other.

It was easy to conclude that I had been mistaken, that my nervous system was somewhat overwrought as a result of my hurried return from Cairo–from Cairo where I had left behind me many a fondly cherished hope. I addressed myself again to the task of unpacking my steamer-trunk and was so engaged when again a sound in the corridor outside brought me upright with a jerk.

A quick footstep approached the door, and there came a muffled rapping upon the panel.

This time I asked no question, but leapt across the room and threw the door open. Nayland Smith stood before me, muffled up in a heavy traveling coat, and with his hat pulled down over his brows.

“At last!” I cried, as my friend stepped in and quickly reclosed the door.

Smith threw his hat upon the settee, stripped off the great-coat, and pulling out his pipe began to load it in feverish haste.

“Well,” I said, standing amid the litter cast out from the trunk, and watching him eagerly, “what’s afoot?”

Nayland Smith lighted his pipe, carelessly dropping the match-end upon the floor at his feet.

“God knows what is afoot this time, Petrie!” he replied. “You and I have lived no commonplace lives; Dr. Fu-Manchu has seen to that; but if I am to believe what the Chief has told me to-day, even stranger things are ahead of us!”

I stared at him wonder-stricken.

“That is almost incredible,” I said; “terror can have no darker meaning than that which Dr. Fu-Manchu gave to it. Fu-Manchu is dead, so what have we to fear?”

“We have to fear,” replied Smith, throwing himself into a corner of the settee, “the Si-Fan!”

I continued to stare, uncomprehendingly.

“I always knew and you always knew,” interrupted Smith in his short, decisive manner, “that Fu-Manchu, genius that he was, remained nevertheless the servant of another or others. He was not the head of that organization which dealt in wholesale murder, which aimed at upsetting the balance of the world. I even knew the name of one, a certain mandarin, and member of the Sublime Order of the White Peacock, who was his immediate superior. I had never dared to guess at the identity of what I may term the Head Center.”

He ceased speaking, and sat gripping his pipe grimly between his teeth, whilst I stood staring at him almost fatuously. Then–

“Evidently you have much to tell me,” I said, with forced calm.

I drew up a chair beside the settee and was about to sit down.

“Suppose you bolt the door,” jerked my friend.

I nodded, entirely comprehending, crossed the room and shot the little nickel bolt into its socket.

“Now,” said Smith as I took my seat, “the story is a fragmentary one in which there are many gaps. Let us see what we know. It seems that the despatch which led to my sudden recall (and incidentally yours) from Egypt to London and which only reached me as I was on the point of embarking at Suez for Rangoon, was prompted by the arrival here of Sir Gregory Hale, whilom attaché at the British Embassy, Peking. So much, you will remember, was conveyed in my instructions.”

“Furthermore, I was instructed, you’ll remember, to put up at the New Louvre Hotel; therefore you came here and engaged this suite whilst I reported to the chief. A stranger business is before us, Petrie, I verily believe, than any we have known hitherto. In the first place, Sir Gregory Hale is here—-“