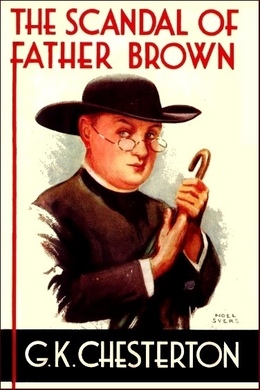 The Scandal of Father Brown

Another collection of G.K. Chesterton’s ingenious, thoughtful, and lyrically written mystery stories featuring the unassuming little priest who solves crimes by imagining himself inside the mind and soul of criminals, thus understanding their motives. The stories are full of paradox, spiritual insight, and ‘Chestertonian fantasy,’ or seeing the extraordinary in the ordinary. In the title story, a beautiful (and married) rich woman has taken up with a distinguished poet–and Father Brown, rather than reacting as expected, appears to be providing assistance. Also includes The Quick One, The Blast of the Book, The Green Man, The Pursuit of Mr Blue, The Crime of the Communist, The Point of a Pin, The Insoluble Problem, and The Vampire of the Village.

It would not be fair to record the adventures of Father Brown, without admitting that he was once involved in a grave scandal. There still are persons, perhaps even of his own community, who would say that there was a sort of blot upon his name. It happened in a picturesque Mexican road-house of rather loose repute, as appeared later; and to some it seemed that for once the priest had allowed a romantic streak in him, and his sympathy for human weakness, to lead him into loose and unorthodox action. The story in itself was a simple one; and perhaps the whole surprise of it consisted in its simplicity.

Burning Troy began with Helen; this disgraceful story began with the beauty of Hypatia Potter. Americans have a great power, which Europeans do not always appreciate, of creating institutions from below; that is by popular initiative. Like every other good thing, it has its lighter aspects; one of which, as has been remarked by Mr. Wells and others, is that a person may become a public institution without becoming an official institution. A girl of great beauty or brilliancy will be a sort of uncrowned queen, even if she is not a Film Star or the original of a Gibson Girl. Among those who had the fortune, or misfortune, to exist beautifully in public in this manner, was a certain Hypatia Hard, who had passed through the preliminary stage of receiving florid compliments in society paragraphs of the local press, to the position of one who is actually interviewed by real pressmen. On War and Peace and Patriotism and Prohibition and Evolution and the Bible she had made her pronouncements with a charming smile; and if none of them seemed very near to the real grounds of her own reputation, it was almost equally hard to say what the grounds of her reputation really were. Beauty, and being the daughter of a rich man, are things not rare in her country; but to these she added whatever it is that attracts the wandering eye of journalism. Next to none of her admirers had even seen her, or even hoped to do so; and none of them could possibly derive any sordid benefit from her father’s wealth. It was simply a sort of popular romance, the modern substitute for mythology; and it laid the first foundations of the more turgid and tempestuous sort of romance in which she was to figure later on; and in which many held that the reputation of Father Brown, as well as of others, had been blown to rags.

It was accepted, sometimes romantically, sometimes resignedly, by those whom American satire has named the Sob Sisters, that she had already married a very worthy and respectable business man of the name of Potter. It was even possible to regard her for a moment as Mrs. Potter, on the universal understanding that her husband was only the husband of Mrs. Potter.

Then came the Great Scandal, by which her friends and enemies were horrified beyond their wildest hopes. Her name was coupled (as the queer phrase goes) with a literary man living in Mexico; in status an American, but in spirit a very Spanish American. Unfortunately his vices resembled her virtues, in being good copy. He was no less a person than the famous or infamous Rudel Romanes; the poet whose works had been so universally popularized by being vetoed by libraries or prosecuted by the police. Anyhow, her pure and placid star was seen in conjunction with this comet. He was of the sort to be compared to a comet, being hairy and hot; the first in his portraits, the second in his poetry. He was also destructive; the comet’s tail was a trail of divorces, which some called his success as a lover and some his prolonged failure as a husband. It was hard on Hypatia; there are disadvantages in conducting the perfect private life in public; like a domestic interior in a shop-window. Interviewers reported doubtful utterances about Love’s Larger Law of Supreme Self-Realization. The Pagans applauded. The Sob Sisterhood permitted themselves a note of romantic regret; some having even the hardened audacity to quote from the poem of Maud Mueller, to the effect that of all the words of tongue or pen, the saddest are “It might have been.” And Mr. Agar P. Rock, who hated the Sob Sisterhood with a holy and righteous hatred, said that in this case he thoroughly agreed with Bret Harte’s emendation of the poem: “More sad are those we daily see; it is, but it hadn’t ought to be.”