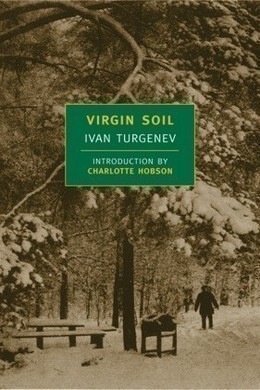 Turgenev was the first writer who was able, having both Slavic and universal imagination enough for it, to interpret modern Russia to the outer world, and Virgin Soil was the last word of his greater testament. It was the book in which many English readers were destined to make his acquaintance about a generation ago, and the effect of it was, like Swinburne’s Songs Before Sunrise, Mazzini’s Duties of Man, and other congenial documents, to break up the insular confines in which they had been reared and to enlarge their new horizon. Afterwards they went on to read Tolstoi, and Turgenev’s powerful and antipathetic fellow-novelist, Dostoievsky, and many other Russian writers: but as he was the greatest artist of them all, his individual revelation of his country’s predicament did not lose its effect. Writing in prose he achieved a style of his own which went as near poetry as narrative prose can do. without using the wrong music: while over his realism or his irony he cast a tinge of that mixed modern and oriental fantasy which belonged to his temperament. He suffered in youth, and suffered badly, from the romantic malady of his century, and that other malady of Russia, both expressed in what M. Haumand terms his Hamletisme. But in Virgin Soil he is easy and almost negligent master of his instrument, and though he is an exile and at times a sharply embittered one, he gathers experience round his theme as only the artist can who has enriched leis art by having outlived his youth without forgetting its pangs, joys, mortifications, and love-songs.

At one o’clock in the afternoon of a spring day in the year 1868, a young man of twenty-seven, carelessly and shabbily dressed, was toiling up the back staircase of a five-storied house on Officers Street in St. Petersburg. Noisily shuffling his down-trodden goloshes and slowly swinging his heavy, clumsy figure, the man at last reached the very top flight and stopped before a half-open door hanging off its hinges. He did not ring the bell, but gave a loud sigh and walked straight into a small, dark passage.

“Is Nejdanov at home?” he called out in a deep, loud voice.

“No, he’s not. I’m here. Come in,” an equally coarse woman’s voice responded from the adjoining room.

“Is that Mashurina?” asked the newcomer.

“Yes, it is I. Are you Ostrodumov?

“Pemien Ostrodumov,” he replied, carefully removing his goloshes, and hanging his shabby coat on a nail, he went into the room from whence issued the woman’s voice.

It was a narrow, untidy room, with dull green coloured walls, badly lighted by two dusty windows. The furnishings consisted of an iron bedstead standing in a corner, a table in the middle, several chairs, and a bookcase piled up with books. At the table sat a woman of about thirty. She was bareheaded, clad in a black stuff dress, and was smoking a cigarette. On catching sight of Ostrodumov she extended her broad, red hand without a word. He shook it, also without saying anything, dropped into a chair and pulled a half-broken cigar out of a side pocket. Mashurina gave him a light, and without exchanging a single word, or so much as looking at one another, they began sending out long, blue puffs into the stuffy room, already filled with smoke.

“Yes. He will be back directly. He has gone to the library with some books.”

Ostrodumov spat to one side.

“Why is he always rushing about nowadays? One can never get hold of him.”

Mashurina took out another cigarette.

“Bored!” Ostrodumov repeated reproachfully. “What self-indulgence! One would think we had no work to do. Heaven knows how we shall get through with it, and he complains of being bored!”

“Have you heard from Moscow?” Mashurina asked after a pause.

“Some of us must go there soon.”

Mashurina took the cigarette out of her mouth.

“But why?” she asked. “They say everything is going on well there.”

“Yes, that is so, but one man has turned out unreliable and must be got rid of. Besides that, there are other things. They want you to come too.”

“Do they say so in the letter?”

Mashurina shook back her heavy hair, which was twisted into a small plait at the back, and fell over her eyebrows in front.

“Well,” she remarked; “if the thing is settled, then there is nothing more to be said.”

“Of course not. Only one can’t do anything without money, and where are we to get it from?”

“Nejdanov must get the money,” she said softly, as if to herself.

“That is precisely what I have come about,” Ostrodumov observed.

“Have you got the letter?” Mashurina asked suddenly.

“I should rather. But never mind, we can read it together presently.”

“You need not doubt what I say. I am speaking the truth,” Ostrodumov grumbled.

“I do not doubt it in the least.” They both ceased speaking and, as before, clouds of smoke rose silently from their mouths and curled feebly above their shaggy heads.

A sound of goloshes was heard from the passage.

“There he is,” Mashurina whispered.

The door opened slightly and a head was thrust in, but it was not the head of Nejdanov.

It was a round head with rough black hair, a broad wrinkled forehead, bright brown eyes under thick eyebrows, a snub nose and a humorously-set mouth. The head looked round, nodded, smiled, showing a set of tiny white teeth, and came into the room with its feeble body, short arms, and bandy legs, which were a little lame. As soon as Mashurina and Ostrodumov caught sight of this head, an expression of contempt mixed with condescension came over their faces, as if each was thinking inwardly, “What a nuisance!” but neither moved nor uttered a single word. The newly arrived guest was not in the least taken aback by this reception, however; on the contrary it seemed to amuse him.

“What is the meaning of this?” he asked in a squeaky voice. “A duet? Why not a trio? And where’s the chief tenor?