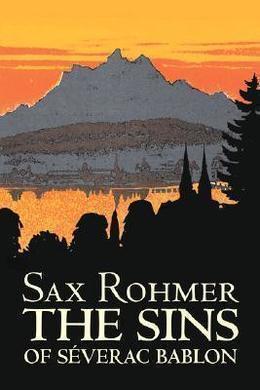 Rohmer’s phenomenally popular tale of a ‘Jewish Robin Hood’. Bablon’s ‘sins’ were the blackmail, robbery and kidnap, he uses these techniques to force the rich to donate huge sums to good causes. An underlieing desire is his determination to improve people’s impression of the Jews by making them give generously.

“There’s half a score of your ancestral halls,” said Julius Rohscheimer, “that I could sell up to-morrow morning!”

Of the quartet that heard his words no two members seemed quite similarly impressed.

The pale face of Adeler, the great financier’s confidential secretary, expressed no emotion whatever. Sir Richard Haredale flashed contempt from his grey eyes–only to veil his scorn of the man’s vulgarity beneath a cloud of tobacco smoke. Tom Sheard, of the Gleaner, drew down a corner of his mouth and felt ashamed of the acquaintance. Denby, the music-hall comedian, softly whistled those bars of a popular ballad set to the words, “I stood in old Jerusalem.”

“Come along to Park Lane with me,” continued Rohscheimer, fixing his dull, prominent eyes upon Sheard, “and you’ll see more English nobility than you’d find inside the House of Lords!”

“What’s made him break out?” the comedian whispered, aside, to Adeler. For it was an open secret that this man, whose financial operations shook the thrones of monarchy, whose social fêtes were attended by the smartest people, was subject to outbursts of the kind which now saw him seated before a rapidly emptying magnum in a corner of the great restaurant. At such times he would frequent the promenades of music-halls, consorting with whom he found there, and would display the gross vulgarity of a Whitechapel pawnbroker or tenth-rate variety agent.

“‘S-sh!” replied the secretary. “A big coup! It is always so with him. Mr. Rohscheimer is overwrought. I shall induce him to take a holiday.”

“Trip up the Jordan?” suggested Denby, with cheery rudeness.

The secretary’s drooping eyelids flickered significantly, but no other indication of resentment displayed itself upon that impassive face.

“A good Jew is proud of his race–and with reason!” he said quietly. “There are Jews and Jews.”

He turned, deferentially, to his employer–that great man having solicited his attention with the words, “Hark to him, Adeler!”

“I did not quite catch Mr. Sheard’s remark,” said Adeler.

“I merely invited Mr. Rohscheimer to observe the scene upon his right,” explained Sheard.

The others turned their eyes in that direction. Through a screen of palm leaves the rose-shaded table lights, sparkling silver, and snowy covers of the supper room were visible. Here a high-light gleamed upon a bare shoulder; there, a stalwart male back showed, blocked out in bold black upon the bright canvas. Waiters flitted noiselessly about. The drone of that vocal orchestra filled the place: the masculine conversation, the brass and wood-wind–the sweeter tones of women, the violins; their laughter, tremolo passages.

“I’m observing it,” growled Rohscheimer. “Nobody in particular there.”

“There is comfort, luxury, there,” said Sheard.

“Now look out yonder,” continued the other.

It was a different prospect whereto he directed their eyes.

The diminuendo of the Embankment lamps, the steely glitter of the waters beyond, the looming bulk of the bridge, the silhouette shape of the On monolith; these things lay below them, dimly to be seen from the brilliant room. Within was warmth, light, and gladness; without, a cold place of shadows, limned in the grey of discontent and the black of want and desolation.

“Every seat there,” continued Sheard, as the company gazed vaguely from the window, “has its burden of hopelessness and misery. Ranks of homeless wretches form up in the arch yonder, awaiting the arrival of the Salvation Army officials. Where, in the whole world, can misery in bulk be found thus side by side with all that wealth can procure?”

There was a brief silence. Sheard was on his hobbyhorse, and there were few there disposed to follow him. The views of the Gleaner are not everybody’s money.

“What sort of gas are you handing us out?” asked Rohscheimer. “Those lazy scamps don’t deserve any comfort; they never worked to get it! The people here are moneyed people.”

“This–that if every guest now in the hotel would write a cheque for an amount representing 1 per cent. of his weekly income, every man, woman, and child under the arch yonder would be provided with board and lodging for the next six months!”

“Why do it?” demanded Rohscheimer, not unreasonably. “Why feed ‘em up on idleness?”

“Their idleness may be compulsory,” replied Sheard. “Few would employ a starving man while a well-nourished one was available.”

“Cut the Socialist twaddle!” directed the other coarsely. “It gets on my nerves! You and your cheques! Who’d you make ‘em payable to? Editor of the Gleaner.”

“To who?” inquired Rohscheimer, with greater interest than grammar.