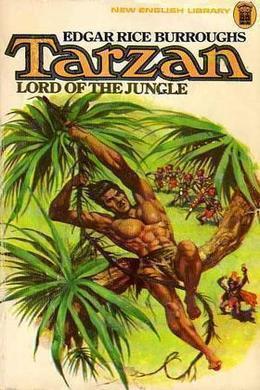 Tarzan, Lord of the Jungle

Cruel slave traders had invaded the jungle of Tarzan of the Apes. Now they were headed toward a fabled empire of riches which no outsider had ever seen, intent on looting. And toward the same legendary land was stumbling the lost James Blake, an American whom Tarzan had vowed to rescue. Following their spoors, the ape-man came upon the lost Valley of the Sepulcher, where Knights Templar still fought to resume their Holy Crusade to free Jerusalem. Soon Tarzan, true Lord of their ancient motherland, was armed with lance and shield, mixed into their jousting and ancient combat. It was then that the slavers struck!

His great bulk swaying to and fro as he threw his weight first upon one side and then upon the other. Tantor the elephant lolled in the shade of the father of forests. Almost omnipotent, he, in the realm of his people. Dango, Sheeta, even Numa the mighty were as naught to the pachyderm. For a hundred years he had come and gone up and down the land that had trembled to the comings and the goings of his forebears for countless ages.

In peace he had lived with Dango the hyena, Sheeta the leopard and Numa the lion. Man alone had made war upon him. Man, who holds the unique distinction among created things of making war on all living creatures, even to his own kind. Man, the ruthless; man, the pitiless; man, the most hated living organism that Nature has evolved.

Always during the long hundred years of his life, Tantor had known man. There had been black men, always. Big black warriors with spears and arrows, little black warriors, swart Arabs with crude muskets and white men with powerful express rifles and elephant guns. The white men had been the last to come and were the worst. Yet Tantor did not hate men–not even white men. Hate, vengeance, envy, avarice, lust are a few of the delightful emotions reserved exclusively for Nature’s noblest work–the lower animals do not know them. Neither do they know fear as man knows it, but rather a certain bold caution that sends the antelope and the zebra, watchful and wary, to the water hole with the lion.

Tantor shared this caution with his fellows and avoided men–especially white men; and so had there been other eyes there that day to see, their possessor might almost have questioned their veracity, or attributed their error to the half-light of the forest as they scanned the figure sprawling prone upon the rough back of the elephant, half dozing in the heat to the swaying of the great body; for, despite the sun-bronzed hide, the figure was quite evidently that of a white man. But there were no other eyes to see and Tantor drowsed in the heat of midday and Tarzan, Lord of the Jungle, dozed upon the back of his mighty friend. A sultry air current moved sluggishly from the north, bringing to the keen nostrils of the ape-man no disquieting perception. Peace lay upon the jungle and the two beasts were content.

In the forest Fahd and Motlog, of the tribe el-Harb, hunted north from the menzil of Sheik Ibn Jad of the Beny Salem fendy el-Guad. With them were black slaves. They advanced warily and in silence upon the fresh spoor of el-fil the elephant, the thoughts of the swart Aarab dwelling upon ivory, those of the black slaves upon fresh meat. The abd Fejjuan, black Galla slave, sleek, ebon warrior, eater of raw meat, famed hunter, led the others.

Fejjuan, as his comrades, thought of fresh meat, but also he thought of el-Habash, the land from which he had been stolen as a boy. He thought of coming again to the lonely Galla hut of his parents. Perhaps el-Habash was not far off now. For months Ibn Jad had been traveling south and now he had come east for a long distance. El-Habash must be near. When he was sure of that his days of slavery would be over and Ibn Jad would have lost his best Galla slave.

Two marches to the north, in the southern extremity of Abyssinia, stood the round dwelling of the father of Fejjuan, almost on the roughly mapped route that Ibn Jad had planned nearly a year since when he had undertaken this mad adventure upon the advice of a learned Sahar, a magician of repute. But of either the exact location of his father’s house or the exact plans of Ibn Jad, Fejjuan was equally ignorant. He but dreamed, and his dreams were flavored with raw meat.

The leaves of the forest drowsed in the heat above the heads of the hunters. Beneath the drowsing leaves of other trees a stone’s throw ahead of them Tarzan and Tantor slept, their perceptive faculties momentarily dulled by the soothing influence of fancied security and the somnolence that is a corollary of equatorial midday.

Fejjuan, the Galla slave, halted in his tracks, stopping those behind him by the silent mandate of an upraised hand. Directly before him, seen dimly between the boles and through the foliage, swayed the giant bulk of el-fil. Fejjuan motioned to Fahd, who moved stealthily to the side of the black. The Galla slave pointed through the foliage toward a patch of gray hide. Fahd raised el-Lazzary, his ancient matchlock, to his shoulder. There was a flash of flame, a burst of smoke, a roar and el-fil, unhit, was bolting through the forest.

As Tantor surged forward at the sound of the report Tarzan started to spring to an upright position, and at the same instant the pachyderm passed beneath a low-hanging limb which struck the ape-man’s head, sweeping him to the ground, where he lay stunned and unconscious.