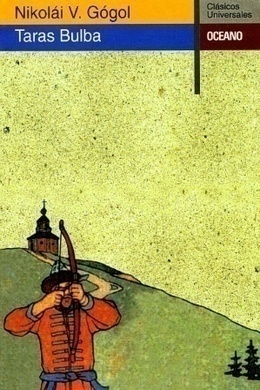 Taras Bulba is a magnificent story portraying the life of the Ukrainian Cossacks who lived by the Dnieper River in the sixteenth century. Taras Bulba is an old and hardened warrior who feels a little rusty from lack of action. When his two sons return from school at Kiev, he eagerly takes them to the ‘setch,’ the camping and training island of the Cossacks. There they spend their time drinking and remembering old glories. It happens, however, that the Cossacks are going through an uneasy truce with their Turkish hegemones and the Tartar horsemen. Taras Bulba, always the warmonger, harangues the Cossacks, engineers a change in leadership, and leads them to attack the Catholic Poles. The Cossacks ride West, destroying everything they meet with extraordinary brutality. Finally, they lay siege to a walled city, but Andrew, Taras’s younger son, discovers that the woman he loves is inside. A masterful and brutal story of the horrors of war.

“Turn round, my boy! How ridiculous you look! What sort of a priest’s cassock have you got on? Does everybody at the academy dress like that?”

With such words did old Bulba greet his two sons, who had been absent for their education at the Royal Seminary of Kief, and had now returned home to their father.

His sons had but just dismounted from their horses. They were a couple of stout lads who still looked bashful, as became youths recently released from the seminary. Their firm healthy faces were covered with the first down of manhood, down which had, as yet, never known a razor. They were greatly discomfited by such a reception from their father, and stood motionless with eyes fixed upon the ground.

“Stand still, stand still! let me have a good look at you,” he continued, turning them around. “How long your gaberdines are! What gaberdines! There never were such gaberdines in the world before. Just run, one of you! I want to see whether you will not get entangled in the skirts, and fall down.”

“How touchy we are! Why shouldn’t I laugh?”

“Because, although you are my father, if you laugh, by heavens, I will strike you!”

“What kind of son are you? what, strike your father!” exclaimed Taras Bulba, retreating several paces in amazement.

“Yes, even my father. I don’t stop to consider persons when an insult is in question.”

“Well, let it be fisticuffs,” said Taras Bulba, turning up his sleeves. “I’ll see what sort of a man you are with your fists.”

And father and son, in lieu of a pleasant greeting after long separation, began to deal each other heavy blows on ribs, back, and chest, now retreating and looking at each other, now attacking afresh.

“Look, good people! the old man has gone man! he has lost his senses completely!” screamed their pale, ugly, kindly mother, who was standing on the threshold, and had not yet succeeded in embracing her darling children. “The children have come home, we have not seen them for over a year; and now he has taken some strange freak–he’s pommelling them.”

“Yes, he fights well,” said Bulba, pausing; “well, by heavens!” he continued, rather as if excusing himself, “although he has never tried his hand at it before, he will make a good Cossack! Now, welcome, son! embrace me,” and father and son began to kiss each other. “Good lad! see that you hit every one as you pommelled me; don’t let any one escape. Nevertheless your clothes are ridiculous all the same. What rope is this hanging there?–And you, you lout, why are you standing there with your hands hanging beside you?” he added, turning to the youngest. “Why don’t you fight me? you son of a dog!”

“What an idea!” said the mother, who had managed in the meantime to embrace her youngest. “Who ever heard of children fighting their own father? That’s enough for the present; the child is young, he has had a long journey, he is tired.” The child was over twenty, and about six feet high. “He ought to rest, and eat something; and you set him to fighting!”

“You are a gabbler!” said Bulba. “Don’t listen to your mother, my lad; she is a woman, and knows nothing. What sort of petting do you need? A clear field and a good horse, that’s the kind of petting for you! And do you see this sword? that’s your mother! All the rest people stuff your heads with is rubbish; the academy, books, primers, philosophy, and all that, I spit upon it all!” Here Bulba added a word which is not used in print. “But I’ll tell you what is best: I’ll take you to Zaporozhe this very week. That’s where there’s science for you! There’s your school; there alone will you gain sense.”

“And are they only to remain home a week?” said the worn old mother sadly and with tears in her eyes. “The poor boys will have no chance of looking around, no chance of getting acquainted with the home where they were born; there will be no chance for me to get a look at them.”

“Enough, you’ve howled quite enough, old woman! A Cossack is not born to run around after women. You would like to hide them both under your petticoat, and sit upon them as a hen sits on eggs. Go, go, and let us have everything there is on the table in a trice. We don’t want any dumplings, honey-cakes, poppy-cakes, or any other such messes: give us a whole sheep, a goat, mead forty years old, and as much corn-brandy as possible, not with raisins and all sorts of stuff, but plain scorching corn-brandy, which foams and hisses like mad.”