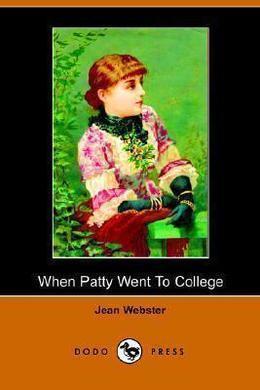 When Patty Went to College

When Patty Went to College is a humorous novel about life in an all-girls’ college at the turn of the century. Patty is a happy, fun-loving prankster who defends the weak and uses her clever brain only when it suits her. The end of the novel sees her contemplating life outside of college, and wondering whether her misbehavior will stand her in good stead for it.

“Paper-weights,” observed Patty, sucking an injured thumb, “were evidently not made for driving in tacks. I wish I had a hammer.”

This remark called forth no response, and Patty peered down from the top of the step-ladder at her room-mate, who was sitting on the floor dragging sofa-pillows and curtains from a dry-goods box.

“Priscilla,” she begged, “you aren’t doing anything useful. Go down and ask Peters for a hammer.”

Priscilla rose reluctantly. “I dare say fifty girls have already been after a hammer.”

“Oh, he has a private one in his back pocket. Borrow that. And, Pris,”–Patty called after her over the transom,–“just tell him to send up a man to take that closet door off its hinges.”

Patty, in the interval, sat down on the top step and surveyed the chaos beneath her. An Oriental rush chair, very much out at the elbows, several miscellaneous chairs, two desks, a divan, a table, and two dry-goods boxes radiated from the center of the room. The floor, as it showed through the interstices, was covered with a grass-green carpet, while the curtains and hangings were of a not very subdued crimson.

“One would scarcely,” Patty remarked to the furniture in general, “call it a symphony in color.”

A knock sounded on the door.

A girl in a blue linen sailor-suit reaching to her ankles, and with a braid of hair hanging down her back, appeared in the doorway. Patty examined her in silence. The girl’s eyes traveled around the room in some surprise, and finally reached the top of the ladder.

“My dear,” murmured Patty, in a deprecatory tone, “I should have taken you for a senior; but”–with a wave of her hand toward the nearest dry-goods box–“come in and sit down. I need your advice. Now, there are shades of green,” she went on, as if continuing a conversation, “which are not so bad with red; but I ask you frankly if that shade of green would go with anything?”

The freshman looked at Patty, and looked at the carpet, and smiled dubiously. “No,” she admitted; “I don’t believe it would.”

“I knew you would say that!” exclaimed Patty, in a tone of relief. “Now what would you advise us to do with the carpet?”

The freshman looked blank. “I–I don’t know, unless you take it up,” she stammered.

“The very thing!” said Patty. “I wonder we hadn’t thought of it before.”

Priscilla reappeared at this point with the announcement, “Peters is the most suspicious man I ever knew!” But she stopped uncertainly as she caught sight of the freshman.

“Priscilla,” said Patty, severely, “I hope you didn’t divulge the fact that we are hanging the walls with tapestry”–this with a wave of her hand toward the printed cotton cloth dangling from the molding.

“I tried not to,” said Priscilla, guiltily, “but he read ‘tapestry’ in my eyes. He had no sooner looked at me than he said, ‘See here, miss; you know it’s against the rules to hang curtains on the walls, and you mustn’t put nails in the plastering, and I don’t believe you need a hammer anyway.’”

“But,” continued Priscilla, hastily, “I stopped and borrowed Georgie Merriles’s hammer on my way back. Oh, I forgot,” she added; “he says we can’t take the closet door off its hinges–that as soon as we get ours off five hundred other young ladies will be wanting theirs off, and that it would take half a dozen men all summer to put them back again.”

A portentous frown was gathering on Patty’s brow, and the freshman, wishing to avert a possible domestic tragedy, inquired timidly, “Who is Peters?”

“Peters,” said Priscilla, “is a short, bow-legged gentleman with a red Vandyke beard, whose technical title is janitor, but who is really dictator. Every one is afraid of him–even Prexy.”

“I’m not,” said Patty; “and,” she added firmly, “that door is coming down whether he says so or not, so I suppose we shall have to do it ourselves.” Her eyes wandered back to the carpet and her face brightened. “Oh, Pris, we’ve got a beautiful new scheme. My friend here says she doesn’t like the carpet at all, and suggests that we take it up, get some black paint, and put it on the floor ourselves. I agree,” she added, “that a Flemish oak floor covered with rugs would be a great improvement.”

Priscilla glanced uncertainly from the freshman to the floor. “Do you think they’d let us do it?”

“It would never do to ask them,” said Patty.

The freshman rose uneasily. “I came,” she said hesitatingly, “to find out–that is, I understand that the girls rent their old books, and I thought, if you wouldn’t mind–”

“It–it was a Latin dictionary I wanted,” said the freshman, “and the girls next door said perhaps you had one.”

“A beautiful one,” said Patty.