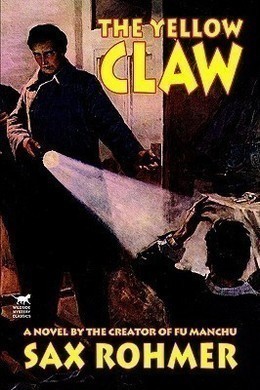 An illusive Chinese mastermind and his henchman have already killed one socialite and they hold a mysterious sway over many of London’s elite. What is the secret of their power? Follow the trail with Sax Rohmer’s famous detectives Gaston Max and Inspector Dunbar as they chase the international gang of hoodlums and their leader, the evil Dr. King.

The sequel, The Golden Scorpion, is also available.

Henry Leroux wrote busily on. The light of the table-lamp, softened and enriched by its mosaic shade, gave an appearance of added opulence to the already handsome appointments of the room. The little table-clock ticked merrily from half-past eleven to a quarter to twelve.

Into the cozy, bookish atmosphere of the novelist’s study penetrated the muffled chime of Big Ben; it chimed the three-quarters. But, with his mind centered upon his work, Leroux wrote on ceaselessly.

An odd figure of a man was this popular novelist, with patchy and untidy hair which lessened the otherwise striking contour of his brow. A neglected and unpicturesque figure, in a baggy, neutral-colored dressing-gown; a figure more fitted to a garret than to this spacious, luxurious workroom, with the soft light playing upon rank after rank of rare and costly editions, deepening the tones in the Persian carpet, making red morocco more red, purifying the vellum and regilding the gold of the choice bindings, caressing lovingly the busts and statuettes surmounting the book-shelves, and twinkling upon the scantily-covered crown of Henry Leroux. The door bell rang.

Leroux, heedless of external matters, pursued his work. But the door bell rang again and continued to ring.

“Soames! Soames!” Leroux raised his voice irascibly, continuing to write the while. “Where the devil are you! Can’t you hear the door bell?”

Soames did not reveal himself; and to the ringing of the bell was added the unmistakable rattling of a letter-box.

He retied the girdle of his dressing-gown, which had become unfastened, and opened the study door. Opposite, across the entrance lobby, was the outer door; and in the light from the lobby lamp he perceived two laughing eyes peering in under the upraised flap of the letter-box. The ringing ceased.

“Are you VERY angry with me for interrupting you?” cried a girl’s voice.

“My dear Miss Cumberly!” said Leroux without irritation; “on the contrary–er–I am delighted to see you–or rather to hear you. There is nobody at home, you know.”…

“I DO know,” replied the girl firmly, “and I know something else, also. Father assures me that you simply STARVE yourself when Mrs. Leroux is away! So I have brought down an omelette!”

He hesitated when about to open the outer door, raising his hands to his dishevelled hair and unshaven chin. The flap of the letter-box dropped; and the girl outside could be heard stifling her laughter.

“You must think me–er–very rude,” began Leroux; “I mean–not to open the door. But”…

“I quite understand,” concluded the voice of the unseen one. “You are a most untidy object! And I shall tell Mira DIRECTLY she returns that she has no right to leave you alone like this! Now I am going to hurry back upstairs; so you may appear safely. Don’t let the omelette get cold. Good night!”

“No, certainly I shall not!” cried Leroux. “So good of you–I–er–do like omelette…. Good night!”

Calmly he returned to his writing-table, where, in the pursuit of the elusive character whose exploits he was chronicling and who had brought him fame and wealth, he forgot in the same moment Helen Cumberly and the omelette.

The table-clock ticked merrily on; SCRATCH–SCRATCH–SPLUTTER–SCRATCH–went Henry Leroux’s pen; for this up-to-date litterateur, essayist by inclination, creator of “Martin Zeda, Criminal Scientist” by popular clamor, was yet old-fashioned enough, and sufficient of an enthusiast, to pen his work, while lesser men dictated.

So, amidst that classic company, smiling or frowning upon him from the oaken shelves, where Petronius Arbiter, exquisite, rubbed shoulders with Balzac, plebeian; where Omar Khayyam leaned confidentially toward Philostratus; where Mark Twain, standing squarely beside Thomas Carlyle, glared across the room at George Meredith, Henry Leroux pursued the amazing career of “Martin Zeda.”

It wanted but five minutes to the hour of midnight, when again the door bell clamored in the silence.

Leroux wrote steadily on. The bell continued to ring, and, furthermore, the ringer could be heard beating upon the outer door.

“Soames!” cried Leroux irritably, “Soames! Why the hell don’t you go to the door!”

Leroux stood up, dashing his pen upon the table.

“I shall have to sack that damned man!” he cried; “he takes too many liberties–stopping out until this hour of the night!”

He pulled open the study door, crossed the hallway, and opened the door beyond.