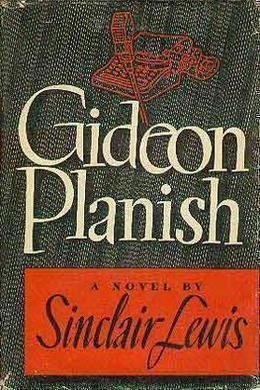 Gideon Planish is a novel by American writer Sinclair Lewis. The novel tells the story of Gideon Planish, an unprincipled social climber who becomes involved in various shady philanthropic organizations in his quest for stature without accountability. The work did not fare as well with critics as some of Lewis’ earlier social novels, and is considered one of his minor works.

The urgent whistle of the Manhattan Flyer woke the boy, and his square face moved with smiling as in half-dreams he was certain that some day he would take that train and be welcomed in lofty rooms by millionaires and poets and actresses. He would be one of them, and much admired.

His present state, at the age of ten, in 1902, was well enough. His father was not only a veterinarian but a taxidermist, a man who had not done so badly in a city like this–for Vulcan, with its population of 38,000, was the seventh city in the great State of Winnemac. The Planishes’ red-brick house, too, was one of the most decorated in that whole row on Sycamore Terrace, and they had a telephone and a leather-bound set of the Encyclopedia Americana. A cultured and enterprising household, altogether. But as the small Gideon Planish heard the enticing train, he was certain that he was going far beyond eagle-stuffing and the treatment of water- spaniels’ indigestion.

He would be a senator or a popular minister, something rotund and oratorical, and he would make audiences of two and three hundred people listen while he shot off red-hot adjectives about Liberty and Plymouth Rock.

But even as the boy was smiling, the last whistle of the train, coming across the swamps and outlying factory yards, was so lost and lonely that he fell back into his habitual doubt of himself and of his rhetorical genius; and that small square face tightened now, with the anxiety and compromise of the prophet who wants both divine sanction and a diet much spicier than locusts and wild honey. Gid already felt a little dizzy on the path that mounted high above his father’s business of embalming hoot-owls. He could feel a forecast of regret that life was going to yank him up to greatness and mountain-sickness.

Into the office of the dean of Adelbert College hastened a chunky young man with hair like a tortoise-shell cat. He glared down at the astonished dean, upraised a sturdy arm like a traffic officer, and bellowed:

“‘If they dare to come out in the open field and defend the gold standard as a good thing, we will fight them to the uttermost!’ Huh?”

“Yes, yes,” the dean said, soothingly. He was an aging man and a careful scholar, for Adelbert was a respectable small Presbyterian college. And he was used to freshmen. But Gid Planish was furiously going on:

“‘Having behind us the producing masses of this nation and the world, supported by the industrial interests–’”

The dean interrupted, “It’s ‘commercial interests,’ not ‘industrial interests.’ If you must quote William Jennings Bryan, do be accurate, my young friend.”

Gid looked pained. Through all of his long and ambitious life–he was now eighteen–he had been oppressed by just such cynical misunderstanding. But he knew the Bryan speech clear to the end, and he was a natural public leader, who never wasted any information that he possessed. He roared on:

”’–supported by the commercial interests, the laboring interests, and the toilers everywhere, we will answer their demand for a gold standard by saying to them: “You shall not press down upon the brow of labor this crown of thorns, you shall not crucify mankind upon a cross of gold,”’ and look, Dean, I got to take Forensics and Extempore Speaking, I got to, that’s what I came to Adelbert for, and I asked the prof–”

“Yuh, I asked the prof, and he said freshmen can’t take Forensics, but I got to take it.”

“Don’t you think that Freshman Rhetoric and a nice course of Freshman English, Wordsworth and the daffodils, would satisfy you?”

“No, sir. I guess maybe it sounds highfalutin, but I got a kind of Message to deliver.”

“And what is your message?”

Gid looked out at the waiting-room. No one was there but the dean’s secretary. He insisted, mounting on his own eloquence:

“That’s it. Of Democracy. So you see I GOT to take Forensics.”

“How do you spell Forensics, young man?”

“You mean I can’t take Forensics?”