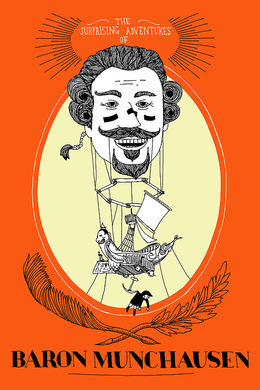 The Surprising Adventures of Baron Munchausen

An instant best-seller and hailed as a comic sensation in the satirical spirit of Gulliver’s Travels and Tom Jones. The Baron’s fantastically exaggerated accounts of war adventures and hunting experiences make this one of the most entertaining books of all time. His astounding feats include riding cannonballs, traveling to the Moon, and pulling himself out of a bog by his own hair. But could they actually be true? “We, the undersigned, do most solemnly affirm, that all the adventures of our friend Baron Munchausen are positive and simple facts. We hope all true believers will give him their full faith and credence. (signed) GULLIVER. SINBAD. ALADDIN.” The author himself led a life worthy of a tall tale: naturalist, antiquarian, scholar, and thief, his name figures with Daniel Defoe and Johnathan Swift as one of the great “travel liars.”

Some years before my beard announced approaching manhood, or, in other words, when I was neither man nor boy, but between both, I expressed in repeated conversations a strong desire of seeing the world, from which I was discouraged by my parents, though my father had been no inconsiderable traveller himself, as will appear before I have reached the end of my singular, and, I may add, interesting adventures. A cousin, by my mother’s side, took a liking to me, often said I was fine forward youth, and was much inclined to gratify my curiosity. His eloquence had more effect than mine, for my father consented to my accompanying him in a voyage to the island of Ceylon, where his uncle had resided as governor many years.

We sailed from Amsterdam with despatches from their High Mightinesses the States of Holland. The only circumstance which happened on our voyage worth relating was the wonderful effects of a storm, which had torn up by the roots a great number of trees of enormous bulk and height, in an island where we lay at anchor to take in wood and water; some of these trees weighed many tons, yet they were carried by the wind so amazingly high, that they appeared like the feathers of small birds floating in the air, for they were at least five miles above the earth: however, as soon as the storm subsided they all fell perpendicularly into their respective places, and took root again, except the largest, which happened, when it was blown into the air, to have a man and his wife, a very honest old couple, upon its branches, gathering cucumbers (in this part of the globe that useful vegetable grows upon trees): the weight of this couple, as the tree descended, over-balanced the trunk, and brought it down in a horizontal position: it fell upon the chief man of the island, and killed him on the spot; he had quitted his house in the storm, under an apprehension of its falling upon him, and was returning through his own garden when this fortunate accident happened. The word fortunate, here, requires some explanation. This chief was a man of a very avaricious and oppressive disposition, and though he had no family, the natives of the island were half-starved by his oppressive and infamous impositions.

The very goods which he had thus taken from them were spoiling in his stores, while the poor wretches from whom they were plundered were pining in poverty. Though the destruction of this tyrant was accidental, the people chose the cucumber-gatherers for their governors, as a mark of their gratitude for destroying, though accidentally, their late tyrant.

After we had repaired the damages we sustained in this remarkable storm, and taken leave of the new governor and his lady, we sailed with a fair wind for the object of our voyage.

In about six weeks we arrived at Ceylon, where we were received with great marks of friendship and true politeness. The following singular adventures may not prove unentertaining.

After we had resided at Ceylon about a fortnight I accompanied one of the governor’s brothers upon a shooting party. He was a strong, athletic man, and being used to that climate (for he had resided there some years), he bore the violent heat of the sun much better than I could; in our excursion he had made a considerable progress through a thick wood when I was only at the entrance.

Near the banks of a large piece of water, which had engaged my attention, I thought I heard a rustling noise behind; on turning about I was almost petrified (as who would not be?) at the sight of a lion, which was evidently approaching with the intention of satisfying his appetite with my poor carcase, and that without asking my consent. What was to be done in this horrible dilemma? I had not even a moment for reflection; my piece was only charged with swan-shot, and I had no other about me: however, though I could have no idea of killing such an animal with that weak kind of ammunition, yet I had some hopes of frightening him by the report, and perhaps of wounding him also. I immediately let fly, without waiting till he was within reach, and the report did but enrage him, for he now quickened his pace, and seemed to approach me full speed: I attempted to escape, but that only added (if an addition could be made) to my distress; for the moment I turned about I found a large crocodile, with his mouth extended almost ready to receive me.