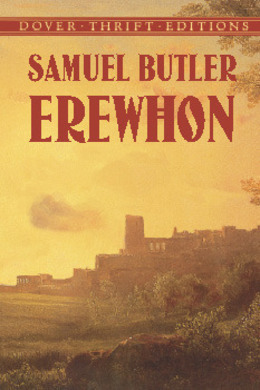 Setting out to make his fortune in a far-off country, a young traveller discovers the remote and beautiful land of Erewhon and is given a home among its extraordinarily handsome citizens. But their visitor soon discovers that this seemingly ideal community has its faults - here crime is treated indulgently as a malady to be cured, while illness, poverty and misfortune are cruelly punished, and all machines have been superstitiously destroyed after a bizarre prophecy. Can he survive in a world where morality is turned upside down? Butler satirically describes a utopian society, using the civilization of ‘Erewhon’ (an anagram for ‘nowhere’) to satirize beliefs popular in the England of his day.

Butler wrote a sequel to the novel, Erewhon Revisited.

If the reader will excuse me, I will say nothing of my antecedents, nor of the circumstances which led me to leave my native country; the narrative would be tedious to him and painful to myself. Suffice it, that when I left home it was with the intention of going to some new colony, and either finding, or even perhaps purchasing, waste crown land suitable for cattle or sheep farming, by which means I thought that I could better my fortunes more rapidly than in England.

It will be seen that I did not succeed in my design, and that however much I may have met with that was new and strange, I have been unable to reap any pecuniary advantage.

It is true, I imagine myself to have made a discovery which, if I can be the first to profit by it, will bring me a recompense beyond all money computation, and secure me a position such as has not been attained by more than some fifteen or sixteen persons, since the creation of the universe. But to this end I must possess myself of a considerable sum of money: neither do I know how to get it, except by interesting the public in my story, and inducing the charitable to come forward and assist me. With this hope I now publish my adventures; but I do so with great reluctance, for I fear that my story will be doubted unless I tell the whole of it; and yet I dare not do so, lest others with more means than mine should get the start of me. I prefer the risk of being doubted to that of being anticipated, and have therefore concealed my destination on leaving England, as also the point from which I began my more serious and difficult journey.

My chief consolation lies in the fact that truth bears its own impress, and that my story will carry conviction by reason of the internal evidences for its accuracy. No one who is himself honest will doubt my being so.

I reached my destination in one of the last months of 1868, but I dare not mention the season, lest the reader should gather in which hemisphere I was. The colony was one which had not been opened up even to the most adventurous settlers for more than eight or nine years, having been previously uninhabited, save by a few tribes of savages who frequented the seaboard. The part known to Europeans consisted of a coast-line about eight hundred miles in length (affording three or four good harbours), and a tract of country extending inland for a space varying from two to three hundred miles, until it a reached the offshoots of an exceedingly lofty range of mountains, which could be seen from far out upon the plains, and were covered with perpetual snow. The coast was perfectly well known both north and south of the tract to which I have alluded, but in neither direction was there a single harbour for five hundred miles, and the mountains, which descended almost into the sea, were covered with thick timber, so that none would think of settling.

With this bay of land, however, the case was different. The harbours were sufficient; the country was timbered, but not too heavily; it was admirably suited for agriculture; it also contained millions on millions of acres of the most beautifully grassed country in the world, and of the best suited for all manner of sheep and cattle. The climate was temperate, and very healthy; there were no wild animals, nor were the natives dangerous, being few in number and of an intelligent tractable disposition.

It may be readily understood that when once Europeans set foot upon this territory they were not slow to take advantage of its capabilities. Sheep and cattle were introduced, and bred with extreme rapidity; men took up their 50,000 or 100,000 acres of country, going inland one behind the other, till in a few years there was not an acre between the sea and the front ranges which was not taken up, and stations either for sheep or cattle were spotted about at intervals of some twenty or thirty miles over the whole country. The front ranges stopped the tide of squatters for some little time; it was thought that there was too much snow upon them for too many months in the year,–that the sheep would get lost, the ground being too difficult for shepherding,–that the expense of getting wool down to the ship’s side would eat up the farmer’s profits,–and that the grass was too rough and sour for sheep to thrive upon; but one after another determined to try the experiment, and it was wonderful how successfully it turned out. Men pushed farther and farther into the mountains, and found a very considerable tract inside the front range, between it and another which was loftier still, though even this was not the highest, the great snowy one which could be seen from out upon the plains. This second range, however, seemed to mark the extreme limits of pastoral country; and it was here, at a small and newly founded station, that I was received as a cadet, and soon regularly employed. I was then just twenty-two years old.