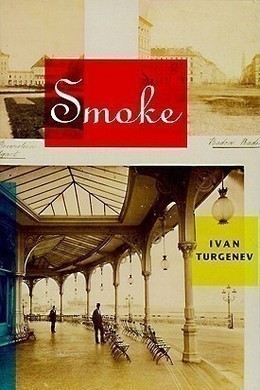 Set in Baden-Baden, Smoke is Ivan Turgenev’s most cosmopolitan novels. It is an exquisite study of politics and society and an enduringly poignant love story. Smoke, with its European setting, barbed wit, and visionary call for Russia to look west, became the center of a famous philosophical breach between Turgenev and Dostoevsky. On his way back to Russia after some years spent in the West, Grigory Mikhailovich Litvinov, the son of a retired official of merchant stock, stops over in Baden-Baden to meet his fiancée Tatyana. However, a chance encounter with his old flame, the manipulative Irina—now married to a general and a prominent figure in aristocratic expatriate circles—unearths feelings buried deep inside the young man’s heart, derailing his plans for the future and throwing his life into turmoil. Around this love story Turgenev constructs a sharply satirical exposé of his countrymen, which famously embroiled its author in a heated quarrel with Dostoevsky. A melancholy evocation of impossible romance, Smoke represents the apogee of Turgenev’s later fiction.

On the 10th of August 1862, at four o’clock in the afternoon, a great number of people were thronging before the well-known Konversation in Baden-Baden. The weather was lovely; everything around–the green trees, the bright houses of the gay city, and the undulating outline of the mountains–everything was in holiday mood, basking in the rays of the kindly sunshine; everything seemed smiling with a sort of blind, confiding delight; and the same glad, vague smile strayed over the human faces too, old and young, ugly and beautiful alike. Even the blackened and whitened visages of the Parisian demi-monde could not destroy the general impression of bright content and elation, while their many-coloured ribbons and feathers and the sparks of gold and steel on their hats and veils involuntarily recalled the intensified brilliance and light fluttering of birds in spring, with their rainbow-tinted wings. But the dry, guttural snapping of the French jargon, heard on all sides could not equal the song of birds, nor be compared with it.

Everything, however, was going on in its accustomed way. The orchestra in the Pavilion played first a medley from the Traviata, then one of Strauss’s waltzes, then ‘Tell her,’ a Russian song, adapted for instruments by an obliging conductor. In the gambling saloons, round the green tables, crowded the same familiar figures, with the same dull, greedy, half-stupefied, half-exasperated, wholly rapacious expression, which the gambling fever lends to all, even the most aristocratic, features. The same well-fed and ultra-fashionably dressed Russian landowner from Tambov with wide staring eyes leaned over the table, and with uncomprehending haste, heedless of the cold smiles of the croupiers themselves, at the very instant of the cry ‘rien ne va plus,’ laid with perspiring hand golden rings of louis d’or on all the four corners of the roulette, depriving himself by so doing of every possibility of gaining anything, even in case of success. This did not in the least prevent him the same evening from affirming the contrary with disinterested indignation to Prince Kokó, one of the well-known leaders of the aristocratic opposition, the Prince Kokó, who in Paris at the salon of the Princess Mathilde, so happily remarked in the presence of the Emperor: ‘Madame, le principe de la propriété est profondément ébranlé en Russie.’ At the Russian tree, à l’arbre Russe, our dear fellow-countrymen and countrywomen were assembled after their wont. They approached haughtily and carelessly in fashionable style, greeted each other with dignity and elegant ease, as befits beings who find themselves at the topmost pinnacle of contemporary culture. But when they had met and sat down together, they were absolutely at a loss for anything to say to one another, and had to be content with a pitiful interchange of inanities, or with the exceedingly indecent and exceedingly insipid old jokes of a hopelessly stale French wit, once a journalist, a chattering buffoon with Jewish shoes on his paltry little legs, and a contemptible little beard on his mean little visage. He retailed to them, à ces princes russes, all the sweet absurdities from the old comic almanacs Charivari and Tintamarre, and they, ces princes russes, burst into grateful laughter, as though forced in spite of themselves to recognise the crushing superiority of foreign wit, and their own hopeless incapacity to invent anything amusing. Yet here were almost all the ‘fine fleur’ of our society, ‘all the high-life and mirrors of fashion.’ Here was Count X., our incomparable dilettante, a profoundly musical nature, who so divinely recites songs on the piano, but cannot in fact take two notes correctly without fumbling at random on the keys, and sings in a style something between that of a poor gypsy singer and a Parisian hairdresser. Here was our enchanting Baron Q., a master in every line: literature, administration, oratory, and card-sharping. Here, too, was Prince Y., the friend of religion and the people, who in the blissful epoch when the spirit-trade was a monopoly, had made himself betimes a huge fortune by the sale of vodka adulterated with belladonna; and the brilliant General O. O., who had achieved the subjugation of something, and the pacification of something else, and who is nevertheless still a nonentity, and does not know what to do with himself. And R. R. the amusing fat man, who regards himself as a great invalid and a great wit, though he is, in fact, as strong as a bull, and as dull as a post…. This R. R. is almost the only man in our day who has preserved the traditions of the dandies of the forties, of the epoch of the ‘Hero of our Times,’ and the Countess Vorotinsky. He has preserved, too, the special gait with the swing on the heels, and le culte de la pose (it cannot even be put into words in Russian), the unnatural deliberation of movement, the sleepy dignity of expression, the immovable, offended-l