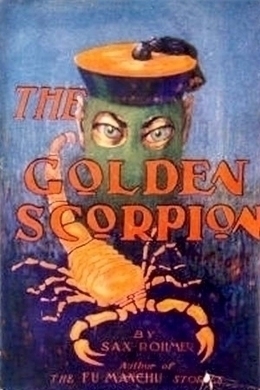 Keppel Stuart, M.D., F. R. S., awoke with a start and discovered himself to be bathed in cold perspiration. The moonlight shone in at his window, but did not touch the bed, therefore his awakening could not be due to this cause. He lay for some time listening for any unfamiliar noise which might account for the sudden disturbance of his usually sound slumbers. In the house below nothing stirred. His windows were widely open and he could detect that vague drumming which is characteristic of midnight London; sometimes, too, the clashing of buffers upon some siding of the Brighton railway where shunting was in progress and occasional siren notes from the Thames. Otherwise–nothing.

He glanced at the luminous disk of his watch. The hour was half-past two. Dawn was not far off. The night seemed to have become almost intolerably hot, and to this heat Stuart felt disposed to ascribe both his awakening and also a feeling of uncomfortable tension of which he now became aware. He continued to listen, and, listening and hearing nothing, recognized with anger that he was frightened. A sense of some presence oppressed him. Someone or something evil was near him–perhaps in the room, veiled by the shadows. This uncanny sensation grew more and more marked.

Stuart sat up in bed, slowly and cautiously, looking all about him. He remembered to have awakened once thus in India–and to have found a great cobra coiled at his feet. His inspection revealed the presence of nothing unfamiliar, and he stepped out on to the floor.

A faint clicking sound reached his ears. He stood quite still. The clicking was repeated.

“There is someone downstairs in my study!” muttered Stuart.

He became aware that the fear which held him was such that unless he acted and acted swiftly he should become incapable of action, but he remembered that whereas the moonlight poured into the bedroom, the staircase would be in complete darkness. He walked barefooted across to the dressing-table and took up an electric torch which lay there. He had not used it for some time, and he pressed the button to learn if the torch was charged. A beam of white light shone out across the room, and at the same instant came another sound.

If it came from below or above, from the adjoining room or from

Outside in the road, Stuart knew not. But following hard upon the mysterious disturbance which had aroused him it seemed to pour ice into his veins, it added the complementary touch to his panic. For it was a kind of low wail–a ghostly minor wail in falling cadences–unlike any sound he had heard. It was so excessively horrible that it produced a curious effect.

Discovering from the dancing of the torch-ray that his hand was trembling, Stuart concluded that he had awakened from a nightmare and that this fiendish wailing was no more than an unusually delayed aftermath of the imaginary horrors which had bathed him in cold perspiration.

He walked resolutely to the door, threw it open and cast the beam of light on to the staircase. Softly he began to descend. Before the study door he paused. There was no sound. He threw open the door, directing the torch-ray into the room.

Cutting a white lane through the blackness, it shone fully upon his writing-table, which was a rather fine Jacobean piece having a sort of quaint bureau superstructure containing cabinets and drawers. He could detect nothing unusual in the appearance of the littered table. A tobacco jar stood there, a pipe resting in the lid. Papers and books were scattered untidily as he had left them, surrounding a tray full of pipe and cigarette ash. Then, suddenly, he saw something else.

One of the bureau drawers was half opened.

Stuart stood quite still, staring at the table. There was no sound in the room. He crossed slowly, moving the light from right to left. His papers had been overhauled methodically. The drawers had been replaced, but he felt assured that all had been examined. The light switch was immediately beside the outer door, and Stuart walked over to it and switched on both lamps. Turning, he surveyed the brilliantly illuminated room. Save for himself, it was empty. He looked out into the hallway again. There was no one there. No sound broke the stillness. But that consciousness of some near presence asserted itself persistently and uncannily.

“My nerves are out of order!” he muttered. “No one has touched my papers. I must have left the drawer open myself.”

He switched off the light and walked across to the door. He had actually passed out intending to return to his room, when he became aware of a slight draught. He stopped.