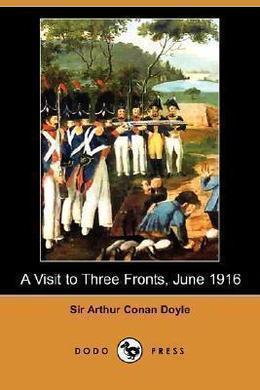 A Visit to Three Fronts

The book is a glorious effort on the part of the author to record the impressions that he formed during his visit to the fronts of the Western Allies during World War I. The book was written in appreciation of the valiant and bold soldiers who fought for their countrymen and whose efforts were being belittled due to increasing rumors.

It is not an easy matter to write from the front. You know that there are several courteous but inexorable gentlemen who may have a word in the matter, and their presence ‘imparts but small ease to the style.’ But above all you have the twin censors of your own conscience and common sense, which assure you that, if all other readers fail you, you will certainly find a most attentive one in the neighbourhood of the Haupt-Quartier. An instructive story is still told of how a certain well-meaning traveller recorded his satisfaction with the appearance of the big guns at the retiring and peaceful village of Jamais, and how three days later, by an interesting coincidence, the village of Jamais passed suddenly off the map and dematerialised into brickdust and splinters.

I have been with soldiers on the warpath before, but never have I had a day so crammed with experiences and impressions as yesterday. Some of them at least I can faintly convey to the reader, and if they ever reach the eye of that gentleman at the Haupt-Quartier they will give him little joy. For the crowning impression of all is the enormous imperturbable confidence of the Army and its extraordinary efficiency in organisation, administration, material, and personnel. I met in one day a sample of many types, an Army commander, a corps commander, two divisional commanders, staff officers of many grades, and, above all, I met repeatedly the two very great men whom Britain has produced, the private soldier and the regimental officer. Everywhere and on every face one read the same spirit of cheerful bravery. Even the half-mad cranks whose absurd consciences prevent them from barring the way to the devil seemed to me to be turning into men under the prevailing influence. I saw a batch of them, neurotic and largely be-spectacled, but working with a will by the roadside. They will volunteer for the trenches yet.

If there are pessimists among us they are not to be found among the men who are doing the work. There is no foolish bravado, no under-rating of a dour opponent, but there is a quick, alert, confident attention to the job in hand which is an inspiration to the observer. These brave lads are guarding Britain in the present. See to it that Britain guards them in the future! We have a bad record in this matter. It must be changed. They are the wards of the nation, both officers and men. Socialism has never had an attraction for me, but I should be a Socialist to-morrow if I thought that to ease a tax on wealth these men should ever suffer for the time or health that they gave to the public cause.

‘Get out of the car. Don’t let it stay here. It may be hit.’ These words from a staff officer give you the first idea that things are going to happen. Up to then you might have been driving through the black country in the Walsall district with the population of Aldershot let loose upon its dingy roads. ‘Put on this shrapnel helmet. That hat of yours would infuriate the Boche’–this was an unkind allusion to the only uniform which I have a right to wear. ‘Take this gas helmet. You won’t need it, but it is a standing order. Now come on!’

We cross a meadow and enter a trench. Here and there it comes to the surface again where there is dead ground. At one such point an old church stands, with an unexploded shell sticking out of the wall. A century hence folk will journey to see that shell. Then on again through an endless cutting. It is slippery clay below. I have no nails in my boots, an iron pot on my head, and the sun above me. I will remember that walk. Ten telephone wires run down the side. Here and there large thistles and other plants grow from the clay walls, so immobile have been our lines. Occasionally there are patches of untidiness. ‘Shells,’ says the officer laconically. There is a racket of guns before us and behind, especially behind, but danger seems remote with all these Bairnfather groups of cheerful Tommies at work around us. I pass one group of grimy, tattered boys. A glance at their shoulders shows me that they are of a public school battalion. ‘I thought you fellows were all officers now,’ I remarked. ‘No, sir, we like it better so.’ ‘Well, it will be a great memory for you. We are all in your debt.’

They salute, and we squeeze past them. They had the fresh, brown faces of boy cricketers. But their comrades were men of a different type, with hard, strong, rugged features, and the eyes of men who have seen strange sights. These are veterans, men of Mons, and their young pals of the public schools have something to live up to.