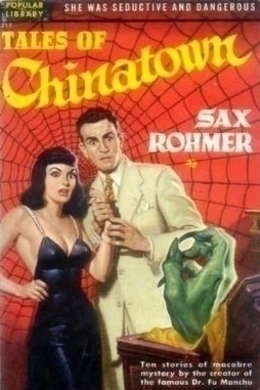 Here is a first-hand description of some of the doings in the slimy, mysterious places of the largest city in England. Here the detectives of Scotland Yard know of many strange things and see the results of the workings of such evil minds as Dr. Fu Manchu. The author is one of the few men who has penetrated the secrets of the Limehouse underworld sufficiently to enable him to write about them authentically and interestingly. Here are sudden deaths in peculiar ways, mysterious disappearances and all sorts of crimes — where human life is valued none too highly.

In the saloon bar of a public-house, situated only a few hundred yards from the official frontier of Chinatown, two men sat at a small table in a corner, engaged in earnest conversation. They afforded a sharp contrast. One was a thick-set and rather ruffianly looking fellow, not too cleanly in either person or clothing, and, amongst other evidences that at one time he had known the prize ring, possessing a badly broken nose. His companion was dressed with that spruceness which belongs to the successful East End Jew; he was cleanly shaven, of slight build, and alert in manner and address.

Having ordered and paid for two whiskies and sodas, the Jew, raising his glass, nodded to his companion and took a drink. The glitter of a magnificent diamond which he wore seemed to attract the other’s attention almost hypnotically.

“Nothing much,” returned the one addressed as Freddy, setting his glass upon the table and selecting a cigarette from a packet which he carried in his pocket.

“I’m not so sure,” growled the other, watching him suspiciously. “You’ve been lying low for a long time, and it’s not like you to slack off except when there’s something big in sight.”

“Hm!” said his companion, lighting his cigarette. “What do you mean exactly?”

Jim Poland–for such was the big man’s name–growled and spat reflectively into a spittoon.

“Oh, have you?” murmured the other. “But tell me what you mean!”

Beneath his suave manner lay a threat, and, indeed, Freddy Cohen, known to his associates as “Diamond Fred,” was in many ways a formidable personality. He had brought to his chosen profession of crook a first-rate American training, together with all that mental agility and cleverness which belong to his race, and was at once an object of envy and admiration amongst the fraternity which keeps Scotland Yard busy.

Jim Poland, physically a more dangerous character, was not in the same class with him; but he was not without brains of a sort, and Cohen, although smiling agreeably, waited with some anxiety for his reply.

“I mean,” growled Poland, “that you’re not wasting your time with Lala Huang for nothing.”

“Perhaps not,” returned Cohen lightly. “She’s a pretty girl; but what business is it of yours?”

“None at all. I ain’t interested in ‘er good looks; neither are you.”

“Come on,” growled Poland, leaning across the table. “I know, and I’m in on it. D’ye hear me? I’m in on it. These are hard times, and we’ve got to stick together.”

“That’s the game right enough. You won’t go wrong if you bring me in, even at fifty-fifty, because maybe I know things about old Huang that you don’t know.”

The Jew’s expression changed subtly, and beneath his drooping lids he glanced aside at the speaker. Then:

Poland bent farther over the table.

“Chinatown’s being watched again. I heard this morning that Red Kerry was down here.”

“Red Kerry!” he echoed. “Red Kerry means nothing in my young life, Jim.”

“Don’t ‘e?” returned Jim, snarling viciously. “The way he cleaned up that dope crowd awhile back seemed to show he was no jug, didn’t it?”

The Jew made a facial gesture as if to dismiss the subject.

“All right,” continued Poland. “Think that way if you like. But the patrols have been doubled. I suppose you know that? And it’s a cert there are special men on duty, ever since the death of that Chink.”

Cohen shifted uneasily, glancing about him in a furtive fashion.

“See what I mean?” continued the other. “Chinatown ain’t healthy just now.”

He finished his whisky at a draught, and, standing up, lurched heavily across to the counter. He returned with two more glasses. Then, reseating himself and bending forward again:

“There’s one thing I reckon you don’t know,” he whispered in Cohen’s ear. “I saw that Chink talking to Lala Huang only a week before the time he was hauled out of Limehouse Reach. I’m wondering, Diamond, if, with all your cleverness, you may not go the same way.”

“Don’t try to pull the creep stuff on me, Jim,” said Cohen uneasily. “What are you driving at, anyway?”

“Well,” replied Poland, sipping his whisky reflectively, “how did that Chink get into the river?”

“And what killed him? It wasn’t drowning, although he was all swelled up.”