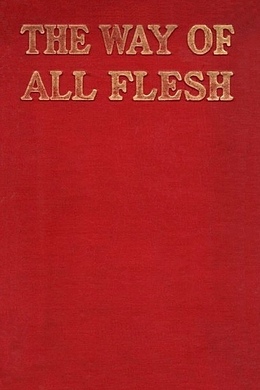 The Way of All Flesh

Hailed by George Bernard Shaw as “one of the summits of human achievement,” Butler’s autobiographical account of a harsh upbringing and troubled adulthood satirizes Victorian hypocrisy in its chronicle of the life and loves of Ernest Pontifex. Along the way, it offers a powerful indictment of 19th-century England’s major institutions.

When I was a small boy at the beginning of the century I remember an old man who wore knee-breeches and worsted stockings, and who used to hobble about the street of our village with the help of a stick. He must have been getting on for eighty in the year 1807, earlier than which date I suppose I can hardly remember him, for I was born in 1802. A few white locks hung about his ears, his shoulders were bent and his knees feeble, but he was still hale, and was much respected in our little world of Paleham. His name was Pontifex.

His wife was said to be his master; I have been told she brought him a little money, but it cannot have been much. She was a tall, square-shouldered person (I have heard my father call her a Gothic woman) who had insisted on being married to Mr Pontifex when he was young and too good-natured to say nay to any woman who wooed him. The pair had lived not unhappily together, for Mr Pontifex’s temper was easy and he soon learned to bow before his wife’s more stormy moods.

Mr Pontifex was a carpenter by trade; he was also at one time parish clerk; when I remember him, however, he had so far risen in life as to be no longer compelled to work with his own hands. In his earlier days he had taught himself to draw. I do not say he drew well, but it was surprising he should draw as well as he did. My father, who took the living of Paleham about the year 1797, became possessed of a good many of old Mr Pontifex’s drawings, which were always of local subjects, and so unaffectedly painstaking that they might have passed for the work of some good early master. I remember them as hanging up framed and glazed in the study at the Rectory, and tinted, as all else in the room was tinted, with the green reflected from the fringe of ivy leaves that grew around the windows. I wonder how they will actually cease and come to an end as drawings, and into what new phases of being they will then enter.

Not content with being an artist, Mr Pontifex must needs also be a musician. He built the organ in the church with his own hands, and made a smaller one which he kept in his own house. He could play as much as he could draw, not very well according to professional standards, but much better than could have been expected. I myself showed a taste for music at an early age, and old Mr Pontifex on finding it out, as he soon did, became partial to me in consequence.

It may be thought that with so many irons in the fire he could hardly be a very thriving man, but this was not the case. His father had been a day labourer, and he had himself begun life with no other capital than his good sense and good constitution; now, however, there was a goodly show of timber about his yard, and a look of solid comfort over his whole establishment. Towards the close of the eighteenth century and not long before my father came to Paleham, he had taken a farm of about ninety acres, thus making a considerable rise in life. Along with the farm there went an old-fashioned but comfortable house with a charming garden and an orchard. The carpenter’s business was now carried on in one of the outhouses that had once been part of some conventual buildings, the remains of which could be seen in what was called the Abbey Close. The house itself, embosomed in honeysuckles and creeping roses, was an ornament to the whole village, nor were its internal arrangements less exemplary than its outside was ornamental. Report said that Mrs Pontifex starched the sheets for her best bed, and I can well believe it.

How well do I remember her parlour half filled with the organ which her husband had built, and scented with a withered apple or two from the pyrus japonica that grew outside the house; the picture of the prize ox over the chimney-piece, which Mr Pontifex himself had painted; the transparency of the man coming to show light to a coach upon a snowy night, also by Mr Pontifex; the little old man and little old woman who told the weather; the china shepherd and shepherdess; the jars of feathery flowering grasses with a peacock’s feather or two among them to set them off, and the china bowls full of dead rose leaves dried with bay salt. All has long since vanished and become a memory, faded but still fragrant to myself.