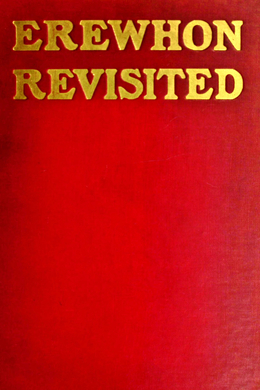 Twenty Years Later, Both by the Original Discoverer of the Country and by His Son

Samuel Butler’s Erewhon Revisited is a satirical sequel to his highly successful Erewhon. Mr. Higgs meets many unpleasant accidents and surprises in Butler’s utopian nation. A new religion has come into existence as a result of distorted and misunderstood sayings, and corruption has taken over society. Butler’s satire touches on subjects ranging from Darwin’s theories of biological evolution to the intelligence of machines.

Before telling the story of my father’s second visit to the remarkable country which he discovered now some thirty years since, I should perhaps say a few words about his career between the publication of his book in 1872, and his death in the early summer of 1891. I shall thus touch briefly on the causes that occasioned his failure to maintain that hold on the public which he had apparently secured at first.

His book, as the reader may perhaps know, was published anonymously, and my poor father used to ascribe the acclamation with which it was received, to the fact that no one knew who it might not have been written by. Omne ignotum pro magnifico, and during its month of anonymity the book was a frequent topic of appreciative comment in good literary circles. Almost coincidently with the discovery that he was a mere nobody, people began to feel that their admiration had been too hastily bestowed, and before long opinion turned all the more seriously against him for this very reason. The subscription, to which the Lord Mayor had at first given his cordial support, was curtly announced as closed before it had been opened a week; it had met with so little success that I will not specify the amount eventually handed over, not without protest, to my father; small, however, as it was, he narrowly escaped being prosecuted for trying to obtain money under false pretences.

The Geographical Society, which had for a few days received him with open arms, was among the first to turn upon him–not, so far as I can ascertain, on account of the mystery in which he had enshrouded the exact whereabouts of Erewhon, nor yet by reason of its being persistently alleged that he was subject to frequent attacks of alcoholic poisoning–but through his own want of tact, and a highly-strung nervous state, which led him to attach too much importance to his own discoveries, and not enough to those of other people. This, at least, was my father’s version of the matter, as I heard it from his own lips in the later years of his life.

“I was still very young,” he said to me, “and my mind was more or less unhinged by the strangeness and peril of my adventures.” Be this as it may, I fear there is no doubt that he was injudicious; and an ounce of judgement is worth a pound of discovery.

Hence, in a surprisingly short time, he found himself dropped even by those who had taken him up most warmly, and had done most to find him that employment as a writer of religious tracts on which his livelihood was then dependent. The discredit, however, into which my father fell, had the effect of deterring any considerable number of people from trying to rediscover Erewhon, and thus caused it to remain as unknown to geographers in general as though it had never been found. A few shepherds and cadets at up-country stations had, indeed, tried to follow in my father’s footsteps, during the time when his book was still being taken seriously; but they had most of them returned, unable to face the difficulties that had opposed them. Some few, however, had not returned, and though search was made for them, their bodies had not been found. When he reached Erewhon on his second visit, my father learned that others had attempted to visit the country more recently–probably quite independently of his own book; and before he had himself been in it many hours he gathered what the fate of these poor fellows doubtless was.

Another reason that made it more easy for Erewhon to remain unknown, was the fact that the more mountainous districts, though repeatedly prospected for gold, had been pronounced non-auriferous, and as there was no sheep or cattle country, save a few river-bed flats above the upper gorges of any of the rivers, and no game to tempt the sportsman, there was nothing to induce people to penetrate into the fastnesses of the great snowy range. No more, therefore, being heard of Erewhon, my father’s book came to be regarded as a mere work of fiction, and I have heard quite recently of its having been seen on a second-hand bookstall, marked “6d. very readable.”