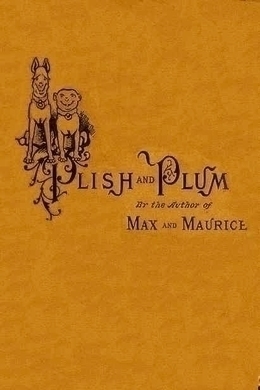 Plisch Plum and the title of a story in pictures of is Wilhelm Busch; two naughty puppies to be drowned by the old Kaspar Schlich. The two equally unruly and quarrelsome boys Paul and Peter save the dogs and take them home with you. In spite of external differences (of a squat, the other lean) commit the dogs in full agreement a number of brazen pranks.

With a pipe between his lips, Two young dogs upon his hips, Jogs along old Caspar Sly; How that man can smoke,–oh, my! But although the pipe-bowl glows Red and hot beneath his nose; Yet his heart is icy-cold; How can earth such wretches hold! “Of what earthly use to me Can such brutes,” he mutters, “be? Do they earn their vittles? No! ‘Tis high time I let ‘em go. What you don’t want, fling away! Them’s my sentiments, I say!”

O’er the pond he silent bends, For to drown them he intends. With their legs the quadrupeds Kick and squirm,–can’t move their heads And the inner voice speaks out: How ‘t will end we gravely doubt.

“That’s well ended,” Caspar cries, Puffs away and homeward hies. But, as often happens, here too Things don’t go as they appear to. Paul and Peter,–so ‘twas fated,– Naked in the bushes waited For a swim; and they descry What was done by wicked Sly.

And like frogs they dove, kechunk, Where the poor young dogs had sunk.

Quickly each one with his hand Drags a little dog to land.

Paul and Peter then with pleasure, Tenderly took each his treasure, And, with speed and joy past telling, Steered for the parental dwelling.

Papa Fittig, calm and cosy, Mamma Fittig, round and rosy, Arm in arm sit peaceful there–

Troubled by no speck of care– On the bench before the door; For the summer day is o’er, And the supper hour is near, And the lads will soon be here.

Soon they burst upon the view, Plish and Plum are with them too.

Fittig thinks a dog a plague: “Nah!” he cries,–“excuse, I beg!” But mamma with soft looks pleaded: “Let them, Fittig!”–and succeeded. Evening milk, fresh and delicious, On the table stood in dishes.

Joyfully they haste indoors; Plish and Plum ahead, of course.

Mercy! look! right in the sweet Cream each wretch has set his feet; And the noise their lapping makes Shows what comfort each one takes.

At the window peeps old Sly, Chuckles loud and says: “My eye!

When night came, all worn and tired, As if nothing had transpired, Paul and Peter in their chamber Lay there, wrapt in peaceful slumber, A soft snoring through their noses Shows how tranquilly each dozes.

But not so with Plish and Plum! They sit ill-at-ease and glum,

Not being lodged to suit their mind,

To turn in they too inclined. Plish, the dog’s old rule to follow, Turns round thrice, his bed to hollow; Plum, however, shows a mind More affectionately inclined.

When we dream of perfect rest Comes full many a troublous guest.

Means of sport are handy too, Here a stocking–there a shoe. These, before the morning glow, Curious changes undergo.

When he comes the boys to wake, And beholds the frightful wreck,

Pale the father cries: “This will Be a monstrous heavy bill!” Vengeful claws are in the air; Feigning sleep, the rogues lie there;

But the mother begs: “I pray, Fittig dear, thy wrath allay!” And her loving words assuage The stern father’s boiling rage. Paul and Peter never care How they look or what they wear.

Plish and Plum, in morals blind, To the dog-house are confined.