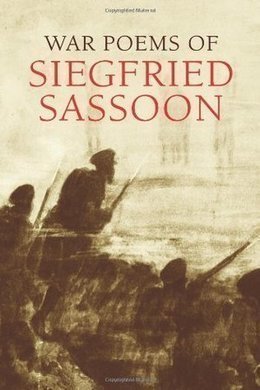 The poems gathered here, which trace the course of the First World War, are an extraordinary testimony to the almost unimaginable experiences of a combatant in that bitter conflict. Moving from the patriotic optimism of the first few poems (…fighting for our freedom, we are free) to the anguish and anger of the later work (where hope, with furtive eyes and grappling fists / Flounders in mud…), there comes a point when the reality of trench-warfare and its aftershocks move beyond comprehension: Sassoon knows this, and it becomes a powerful element in his art. As a book, the images have a cumulative relentlessness that make it almost impossible to read more than a few poems in one sitting.

Dim, gradual thinning of the shapeless gloom Shudders to drizzling daybreak that reveals Disconsolate men who stamp their sodden boots And turn dulled, sunken faces to the sky Haggard and hopeless. They, who have beaten down The stale despair of night, must now renew Their desolation in the truce of dawn, Murdering the livid hours that grope for peace.

Yet these, who cling to life with stubborn hands, Can grin through storms of death and find a gap In the clawed, cruel tangles of his defence. They march from safety, and the bird-sung joy Of grass-green thickets, to the land where all Is ruin, and nothing blossoms but the sky That hastens over them where they endure Sad, smoking, flat horizons, reeking woods, And foundered trench-lines volleying doom for doom.

O my brave brown companions, when your souls Flock silently away, and the eyeless dead Shame the wild beast of battle on the ridge, Death will stand grieving in that field of war Since your unvanquished hardihood is spent. And through some mooned Valhalla there will pass Battalions and battalions, scarred from hell; The unreturning army that was youth; The legions who have suffered and are dust.

Soldiers are citizens of death’s gray land, Drawing no dividend from time’s to-morrows; In the great hour of destiny they stand, Each with his feuds, and jealousies, and sorrows. Soldiers are sworn to action; they must win Some flaming, fatal climax with their lives. Soldiers are dreamers; when the guns begin They think of firelit homes, clean beds, and wives.

I see them in foul dug-outs, gnawed by rats, And in the ruined trenches, lashed with rain, Dreaming of things they did with balls and bats, And mocked by hopeless longing to regain Bank-holidays, and picture shows, and spats, And going to the office in the train.

Darkness: the rain sluiced down; the mire was deep; It was past twelve on a mid-winter night, When peaceful folk in beds lay snug asleep: There, with much work to do before the light, We lugged our clay-sucked boots as best we might Along the trench; sometimes a bullet sang, And droning shells burst with a hollow bang; We were soaked, chilled and wretched, every one. Darkness: the distant wink of a huge gun.

I turned in the black ditch, loathing the storm; A rocket fizzed and burned with blanching flare, And lit the face of what had been a form Floundering in mirk. He stood before me there; I say that he was Christ; stiff in the glare, And leaning forward from his burdening task, Both arms supporting it; his eyes on mine Stared from the woeful head that seemed a mask Of mortal pain in Hell’s unholy shine.

No thorny crown, only a woollen cap He wore–an English soldier, white and strong, Who loved his time like any simple chap, Good days of work and sport and homely song; Now he has learned that nights are very long, And dawn a watching of the windowed sky. But to the end, unjudging, he’ll endure Horror ancf pain, not uncontent to die That Lancaster on Lune may stand secure.

He faced me, reeling in his weariness, Shouldering his load of planks, so hard to bear. I say that he was Christ, who wrought to bless All groping things with freedom bright as air, And with His mercy washed and made them fair. Then the flame sank, and all grew black as pitch, While we began to struggle along the ditch; And some one flung his burden in the muck, Mumbling: “O Christ Almighty, now I’m stuck!”