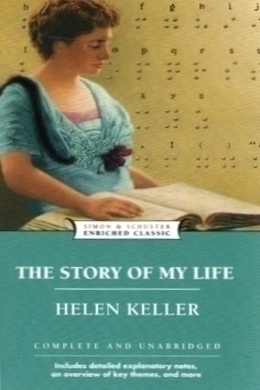 The Story of My Life

Helen Keller overcame the seemingly insurmountable obstacles of deafness and blindness to become an icon of perseverance, respected and honored by readers, historians, and activists. Her autobiography The Story of My Life, is still read today for its ability to motivate and reassure readers. Helen began working on The Story of My Life while a student at Radcliffe College with help from John Albert Macy, a Harvard professor and future husband of Helen’s first teacher and lifelong companion, Anne Sullivan. In the book Keller recounts the first twenty-two years of her life, from her early childhood illness that left her blind and deaf through her second year at Radcliffe College.

It is with a kind of fear that I begin to write the history of my life. I have, as it were, a superstitious hesitation in lifting the veil that clings about my childhood like a golden mist. The task of writing an autobiography is a difficult one. When I try to classify my earliest impressions, I find that fact and fancy look alike across the years that link the past with the present. The woman paints the child’s experiences in her own fantasy. A few impressions stand out vividly from the first years of my life; but “the shadows of the prison-house are on the rest.” Besides, many of the joys and sorrows of childhood have lost their poignancy; and many incidents of vital importance in my early education have been forgotten in the excitement of great discoveries. In order, therefore, not to be tedious I shall try to present in a series of sketches only the episodes that seem to me to be the most interesting and important.

The family on my father’s side is descended from Caspar Keller, a native of Switzerland, who settled in Maryland. One of my Swiss ancestors was the first teacher of the deaf in Zurich and wrote a book on the subject of their education–rather a singular coincidence; though it is true that there is no king who has not had a slave among his ancestors, and no slave who has not had a king among his.

My grandfather, Caspar Keller’s son, “entered” large tracts of land in Alabama and finally settled there. I have been told that once a year he went from Tuscumbia to Philadelphia on horseback to purchase supplies for the plantation, and my aunt has in her possession many of the letters to his family, which give charming and vivid accounts of these trips.

My Grandmother Keller was a daughter of one of Lafayette’s aides, Alexander Moore, and granddaughter of Alexander Spotswood, an early Colonial Governor of Virginia. She was also second cousin to Robert E. Lee.

My father, Arthur H. Keller, was a captain in the Confederate Army, and my mother, Kate Adams, was his second wife and many years younger. Her grandfather, Benjamin Adams, married Susanna E. Goodhue, and lived in Newbury, Massachusetts, for many years. Their son, Charles Adams, was born in Newburyport, Massachusetts, and moved to Helena, Arkansas. When the Civil War broke out, he fought on the side of the South and became a brigadier-general. He married Lucy Helen Everett, who belonged to the same family of Everetts as Edward Everett and Dr. Edward Everett Hale. After the war was over the family moved to Memphis, Tennessee.

I lived, up to the time of the illness that deprived me of my sight and hearing, in a tiny house consisting of a large square room and a small one, in which the servant slept. It is a custom in the South to build a small house near the homestead as an annex to be used on occasion. Such a house my father built after the Civil War, and when he married my mother they went to live in it. It was completely covered with vines, climbing roses and honeysuckles. From the garden it looked like an arbour. The little porch was hidden from view by a screen of yellow roses and Southern smilax. It was the favourite haunt of humming-birds and bees.

The Keller homestead, where the family lived, was a few steps from our little rose-bower. It was called “Ivy Green” because the house and the surrounding trees and fences were covered with beautiful English ivy. Its old-fashioned garden was the paradise of my childhood.

Even in the days before my teacher came, I used to feel along the square stiff boxwood hedges, and, guided by the sense of smell would find the first violets and lilies. There, too, after a fit of temper, I went to find comfort and to hide my hot face in the cool leaves and grass. What joy it was to lose myself in that garden of flowers, to wander happily from spot to spot, until, coming suddenly upon a beautiful vine, I recognized it by its leaves and blossoms, and knew it was the vine which covered the tumble-down summer-house at the farther end of the garden! Here, also, were trailing clematis, drooping jessamine, and some rare sweet flowers called butterfly lilies, because their fragile petals resemble butterflies’ wings. But the roses–they were loveliest of all. Never have I found in the greenhouses of the North such heart-satisfying roses as the climbing roses of my southern home. They used to hang in long festoons from our porch, filling the whole air with their fragrance, untainted by any earthy smell; and in the early morning, washed in the dew, they felt so soft, so pure, I could not help wondering if they did not resemble the asphodels of God’s garden.