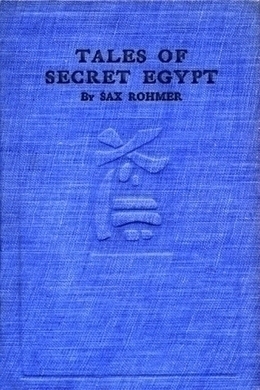 The scenes of this story are laid in Egypt – Abu-Tabah, the inscrutable Egyptian, who appears and disappears so mysteriously, is not so blood-curdling a villain as Fu Manchu, but his exploits possess the same breathless interest that characterized the activities of the yellow doctor. In the latter half of the book, notably in the story, The Valley of the Sorceress, there is an element new in Rohmer’s work – that of the supernatural…

The duhr, or noonday call to prayer, had just sounded from the minarets of the Mosques of Kalaûn and En-Nasîr, and I was idly noting the negligible effect of the adan upon the occupants of the neighboring shops–coppersmiths for the most part–when suddenly my errant attention became arrested.

A mendicant of unwholesome aspect crouched in the shadow of the narrow gateway at the entrance to the Sûk es-Saîgh, or gold and silver bazaar, having his one serviceable eye fixed in a malevolent stare upon something or someone immediately behind me.

It is part and parcel of my difficult profession to subdue all impulses and to think before acting. I sipped my coffee and selected a fresh cigarette from the silver box upon the rug beside me. In this interval I had decided that the one-eyed mendicant cherished in his bosom an implacable and murderous hatred for my genial friend, Ali Mohammed, the dealer in antiques; that he was unaware of my having divined his bloody secret; and that if I would profit by my accidental discovery, I must continue to feign complete ignorance of it.

Turning casually to Ali Mohammed, I was startled to observe the expression upon his usually immobile face: he was positively gray, and I thought I detected a faint rattling sound, apparently produced by his teeth; his eyes were set as if by hypnosis upon the uncleanly figure huddled in the shadow of the low gate.

Ali Mohammed shook his head feebly, removed his eyes by a palpable effort from the watcher in the gateway, but almost instantly reverted again to that fixed and terrified scrutiny.

“Not at all, Kernaby Pasha,” he chattered; “not in the least.”

He passed a hand rapidly over a brow wet with perspiration, and moistened his lips, which were correspondingly dry. I determined upon a diplomatic tour de force; I looked him squarely in the face.

“For some reason,” I said distinctly, “you are in deadly fear of the wall-eyed mendicant who is sitting by the gate of the Sûk es-Saîgh, O Ali Mohammed, my friend.”

I turned with assumed carelessness. The beggar of murderous appearance had vanished, and Ali Mohammed was slowly recovering his composure. I knew that I must act quickly, or he would deny with the urbane mendacity of the Egyptian all knowledge of the one-eyed one; therefore–

“Acquaint me with the reason of your apprehensions,” I said, at the same time offering him one of his own cigarettes; “it may be that I can assist you.”

A moment he hesitated, glancing doubtfully in the direction of the gate and back to my face; then–

“It is one of the people of Tîr,” he whispered, bending close to my ear; “of the evil ginn who are the creatures of Abû Tabâh.”

I was puzzled and expressed my doubt in words.

“Alas,” replied Ali Mohammed, “the Imám Abû Tabâh is neither a man nor an official; he is a magician.”

“Indeed! then you speak of one bearing the curious name of Abû Tabâh, who is at once the holder of a holy office and also one who has dealings with the ginn and the Efreets. This is strange, Ali Mohammed, my friend.”

“It is strange and terrible,” he whispered, “and I fear that my path is beset with pitfalls and slopeth down to desolation.” He pronounced the Takbîr, “Alláhu akbar!” and uttered the words “Hadeed! yá mashûm!” (Iron! thou unlucky!), a potent invocation, as the ginn’s dread of that metal is well known. “There are things of which one may not speak,” he declared; “and this is one of them.”

Sorely puzzled as I was by this most mysterious happening, yet, because of the pious words of my friend, I knew that the incident was closed so far as confidences were concerned; and I presently took my departure, my mind filled with all sorts of odd conjectures by which I sought to explain the matter. I was used to the superstitions of that quarter where almost every gate and every second street has its guardian ginnee, but who and what was Abû Tabâh? An Imám, apparently, though to what mosque attached Ali Mohammed had not mentioned. And why did Ali Mohammed fear Abû Tabâh?

So my thoughts ran, more or less ungoverned, whilst I made my way through streets narrow and tortuous in the direction of the Rondpoint du Mûski. I saw no more of the wall-eyed mendicant; but in a court hard by the Mosque of el-Ashraf I found myself in the midst of a squabbling crowd of natives surrounding someone whom I gathered, from the direction of their downward glances, to be prone upon the ground. Since the byways of the Sûk el-Attârin are little frequented by Europeans, at midday, I thrust my way into the heart of the throng, thinking that some stray patron of Messrs. Cook and Son (Egypt, Ltd.) might possibly have got into trouble or have been overcome by the heat.