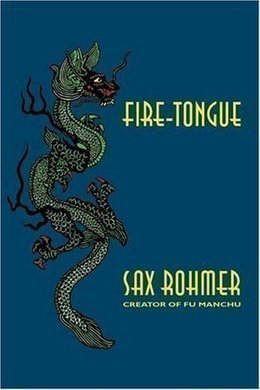 Fire-Tongue is the mystery thriller that English writer Sax Rohmer credited to his friend, Harry Houdini. Rohmer plotted the challenge like a trap set by his best-known creation, the diabolical Dr. Fu Manchu. The prolific author set up the perfect crime with no idea how to solve it, and worked the case himself along with his fictional detective, Paul Harley. In Fire-Tongue, Harley sees a man die at the dinner table. (Something in the soup?) The detective’s “uncanny sixth sense” tells him it was murder. But he can’t prove it, let alone catch the killer. The trouble was, neither could Rohmer. And the story already had started running as a magazine serial As Rohmer told it, he was desperately stumped when the magician and escape artist Houdini appeared at his door. Houdini slipped him - what else? - the secret way out. The story continues with all the clues, exotic suspects, slinky gowns, disguises, chases and resolutions that Rohmer’s fans expected, and still find, in his fantastical fiction.

Some of Paul Harley’s most interesting cases were brought to his notice in an almost accidental way. Although he closed his office in Chancery Lane sharply at the hour of six, the hour of six by no means marked the end of his business day. His work was practically ceaseless. But even in times of leisure, at the club or theatre, fate would sometimes cast in his path the first slender thread which was ultimately to lead him into some unsuspected labyrinth, perhaps in the underworld of London, perhaps in a city of the Far East.

His investigation of the case of the man with the shaven skull afforded an instance of this, and even more notable was his first meeting with Major Jack Ragstaff of the Cavalry Club, a meeting which took place after the office had been closed, but which led to the unmasking of perhaps the most cunning murderer in the annals of crime.

One summer’s evening when the little clock upon his table was rapidly approaching the much-desired hour, Harley lay back in his chair and stared meditatively across his private office in the direction of a large and very handsome Burmese cabinet, which seemed strangely out of place amid the filing drawers, bookshelves, and other usual impedimenta of a professional man. A peculiarly uninteresting week was drawing to a close, and he was wondering if this betokened a decreased activity in the higher criminal circles, or whether it was merely one of those usual quiescent periods which characterize every form of warfare.

Paul Harley, although the fact was unknown to the general public, occupied something of the position of an unofficial field marshal of the forces arrayed against evildoers. Throughout the war he had undertaken confidential work of the highest importance, especially in regard to the Near East, with which he was intimately acquainted. A member of the English bar, and the last court of appeal to which Home Office and Foreign Office alike came in troubled times, the brass plate upon the door of his unassuming premises in Chancery Lane conveyed little or nothing to the uninitiated.

The man himself, with his tropical bronze and air of eager vitality, must have told the most careless observer that he stood in the presence of an extraordinary personality. He was slightly gray at the temples in these days, but young in mind and body, physically fit, and possessed of an intellectual keenness which had forced recognition from two hemispheres. His office was part of an old city residence, and his chambers adjoined his workroom, so that now, noting that his table clock registered the hour of six, he pressed a bell which summoned Innes, his confidential secretary.

“Very uneventful, Mr. Harley. About a month of this and you will have to resume practice at the bar.”

“Not a bit likely, Innes,” he replied. “No more briefs for me. I shall retire to Norfolk and devote my declining years to fishing.”

“I don’t know that fishing would entirely satisfy me,” said Innes.

“It would more than satisfy me,” returned Harley. “But every man to his own ambition. Well, there is no occasion to wait; you might as well get along. But what’s that you’ve got in your hand?”

“Well,” replied Innes, laying a card upon the table, “I was just coming in with it when you rang.”

Paul Harley glanced at the card.

“Sir Charles Abingdon,” he read aloud, staring reflectively at his secretary. “That is the osteologist?”

“Yes,” answered Innes, “but I fancy he has retired from practice.”

“Ah,” murmured Harley, “I wonder what he wants. I suppose I had better see him, as I fancy that he and I met casually some years ago in India. Ask him to come in, will you?”

Innes retiring, there presently entered a distinguished-looking, elderly gentleman upon whose florid face rested an expression not unlike that of embarrassment.

“Mr. Harley,” he began, “I feel somewhat ill at ease in encroaching upon your time, for I am by no means sure that my case comes within your particular province.”

“Sit down, Sir Charles,” said Harley with quiet geniality. “Officially, my working day is ended; but if nothing comes of your visit beyond a chat it will have been very welcome. Calcutta, was it not, where we last met?”

“It was,” replied Sir Charles, placing his hat and cane upon the table and sitting down rather wearily in a big leather armchair which Harley had pushed forward. “If I presume upon so slight an acquaintance, I am sorry, but I must confess that only the fact of having met you socially encouraged me to make this visit.”

He raised his eyes to Harley’s face and gazed at him with that peculiarly searching look which belongs to members of his profession; but mingled with it was an expression of almost pathetic appeal, of appeal for understanding, for sympathy of some kind.

“Go on, Sir Charles,” said Harley. He pushed forward a box of cigars. “Will you smoke?”