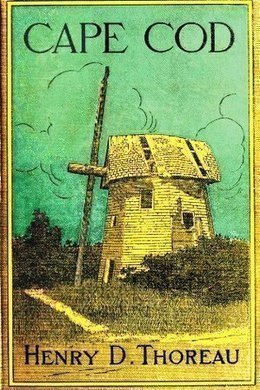 Based on several trips to the Cape and originally published as a series of articles, Henry David Thoreau’s Cape Cod is a remarkable work that depicts the natural beauty of Cape Cod and the nature that surrounds it. Thoreau, a consummate lover of the outdoors and nature is right at home in the Cape and he details his excitement of the area with naturalist portraits of the indigenous species and animals. Any lover of nature or of Cape Cod in general will delight in this captivating depiction of the area in the early to mid 1800s.

Wishing to get a better view than I had yet had of the ocean, which, we are told, covers more than two-thirds of the globe, but of which a man who lives a few miles inland may never see any trace, more than of another world, I made a visit to Cape Cod in October, 1849, another the succeeding June, and another to Truro in July, 1855; the first and last time with a single companion, the second time alone. I have spent, in all, about three weeks on the Cape; walked from Eastham to Province-town twice on the Atlantic side, and once on the Bay side also, excepting four or five miles, and crossed the Cape half a dozen times on my way; but having come so fresh to the sea, I have got but little salted. My readers must expect only so much saltness as the land breeze acquires from blowing over an arm of the sea, or is tasted on the windows and the bark of trees twenty miles inland, after September gales. I have been accustomed to make excursions to the ponds within ten miles of Concord, but latterly I have extended my excursions to the seashore.

I did not see why I might not make a book on Cape Cod, as well as my neighbor on “Human Culture.” It is but another name for the same thing, and hardly a sandier phase of it. As for my title, I suppose that the word Cape is from the French cap; which is from the Latin caput, a head; which is, perhaps, from the verb capere, to take,–that being the part by which we take hold of a thing:–Take Time by the forelock. It is also the safest part to take a serpent by. And as for Cod, that was derived directly from that “great store of codfish” which Captain Bartholomew Gosnold caught there in 1602; which fish appears to have been so called from the Saxon word codde, “a case in which seeds are lodged,” either from the form of the fish, or the quantity of spawn it contains; whence also, perhaps, codling (pomum coctile?) and coddle,–to cook green like peas. (V. Dic.)

Cape Cod is the bared and bended arm of Massachusetts: the shoulder is at Buzzard’s Bay; the elbow, or crazy-bone, at Cape Mallebarre; the wrist at Truro; and the sandy fist at Provincetown,–behind which the State stands on her guard, with her back to the Green Mountains, and her feet planted on the floor of the ocean, like an athlete protecting her Bay,–boxing with northeast storms, and, ever and anon, heaving up her Atlantic adversary from the lap of earth,–ready to thrust forward her other fist, which keeps guard the while upon her breast at Cape Ann.

On studying the map, I saw that there must be an uninterrupted beach on the east or outside of the forearm of the Cape, more than thirty miles from the general line of the coast, which would afford a good sea view, but that, on account of an opening in the beach, forming the entrance to Nauset Harbor, in Orleans, I must strike it in Eastham, if I approached it by land, and probably I could walk thence straight to Race Point, about twenty-eight miles, and not meet with any obstruction.

We left Concord, Massachusetts, on Tuesday, October 9th, 1849. On reaching Boston, we found that the Provincetown steamer, which should have got in the day before, had not yet arrived, on account of a violent storm; and, as we noticed in the streets a handbill headed, “Death! one hundred and forty-five lives lost at Cohasset,” we decided to go by way of Cohasset. We found many Irish in the cars, going to identify bodies and to sympathize with the survivors, and also to attend the funeral which was to take place in the afternoon;–and when we arrived at Cohasset, it appeared that nearly all the passengers were bound for the beach, which was about a mile distant, and many other persons were flocking in from the neighboring country. There were several hundreds of them streaming off over Cohasset common in that direction, some on foot and some in wagons,–and among them were some sportsmen in their hunting-jackets, with their guns, and game-bags, and dogs. As we passed the graveyard we saw a large hole, like a cellar, freshly dug there, and, just before reaching the shore, by a pleasantly winding and rocky road, we met several hay-riggings and farm-wagons coming away toward the meeting-house, each loaded with three large, rough deal boxes. We did not need to ask what was in them. The owners of the wagons were made the undertakers. Many horses in carriages were fastened to the fences near the shore, and, for a mile or more, up and down, the beach was covered with people looking out for bodies, and examining the fragments of the wreck. There was a small island called Brook Island, with a hut on it, lying just off the shore. This is said to be the rockiest shore in Massachusetts, from Nantasket to Scituate,–hard sienitic rocks, which the waves have laid bare, but have not been able to crumble. It has been the scene of many a shipwreck.