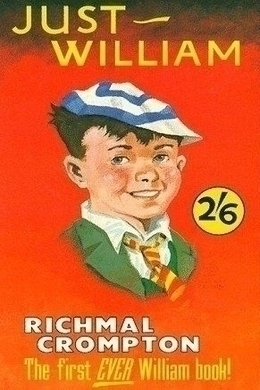 Just William makes his mark in this hilarious collection of twelve classic stories. Whether it’s trying to arrange a marriage for his sister or taking a job as a boot boy as step one in his grand plan to run away, William manages to cause chaos wherever he goes.

It all began with William’s aunt, who was in a good temper that morning, and gave him a shilling for posting a letter for her and carrying her parcels from the grocer’s.

“Buy some sweets or go to the Pictures,” she said carelessly, as she gave it to him.

William walked slowly down the road, gazing thoughtfully at the coin. After deep calculations, based on the fact that a shilling is the equivalent of two sixpences, he came to the conclusion that both luxuries could be indulged in.

In the matter of sweets, William frankly upheld the superiority of quantity over quality. Moreover, he knew every sweet shop within a two miles radius of his home whose proprietor added an extra sweet after the scale had descended, and he patronised these shops exclusively. With solemn face and eager eye, he always watched the process of weighing, and “stingy” shops were known and banned by him.

He wandered now to his favourite confectioner and stood outside the window for five minutes, torn between the rival attractions of Gooseberry Eyes and Marble Balls. Both were sold at 4 ounces for 2d. William never purchased more expensive luxuries. At last his frowning brow relaxed and he entered the shop.

“Sixpennoth of Gooseberry Eyes,” he said, with a slightly self-conscious air. The extent of his purchases rarely exceeded a penny.

“Gotter bit of money this mornin’,” explained William carelessly, with the air of a Rothschild.

He watched the weighing of the emerald green dainties with silent intensity, saw with satisfaction the extra one added after the scale had fallen, received the precious paper bag, and, putting two sweets into his mouth, walked out of the shop.

Sucking slowly, he walked down the road towards the Picture Palace. William was not in the habit of frequenting Picture Palaces. He had only been there once before in his life.

It was a thrilling programme. First came the story of desperate crooks who, on coming out of any building, glanced cautiously up and down the street in huddled, crouching attitudes, then crept ostentatiously on their way in a manner guaranteed to attract attention and suspicion at any place and time. The plot was involved. They were pursued by police, they leapt on to a moving train and then, for no accountable reason, leapt from that on to a moving motor-car and from that they plunged into a moving river. It was thrilling and William thrilled. Sitting quite motionless, he watched, with wide, fascinated eyes, though his jaws never ceased their rotatory movement and every now and then his hand would go mechanically to the paper bag on his knees and convey a Gooseberry Eye to his mouth.

After many adventures the simple country maiden was won by a simple country son of the soil in picturesque rustic attire, whose emotions were faithfully portrayed by gestures that must have required much gymnastic skill; the villain was finally shown languishing in a prison cell, still indulging in frequent eye-brow play.

Next came another love-story–this time of a noble-hearted couple, consumed with mutual passion and kept apart not only by a series of misunderstandings possible only in a picture play, but also by maidenly pride and reserve on the part of the heroine and manly pride and reserve on the part of the hero that forced them to hide their ardour beneath a cold and haughty exterior. The heroine’s brother moved through the story like a good fairy, tender and protective towards his orphan sister and ultimately explained to each the burning passion of the other.

It was moving and touching and William was moved and touched.

The next was a comedy. It began by a solitary workman engaged upon the re-painting of a door and ended with a miscellaneous crowd of people, all covered with paint, falling downstairs on top of one another. It was amusing. William was riotously and loudly amused.

Lastly came the pathetic story of a drunkard’s downward path. He began as a wild young man in evening clothes drinking intoxicants and playing cards, he ended as a wild old man in rags still drinking intoxicants and playing cards. He had a small child with a pious and superior expression, who spent her time weeping over him and exhorting him to a better life, till, in a moment of justifiable exasperation, he threw a beer bottle at her head. He then bedewed her bed in Hospital with penitent tears, tore out his hair, flung up his arms towards Heaven, beat his waistcoat, and clasped her to his breast, so that it was not to be wondered at that, after all that excitement, the child had a relapse and with the words “Good-bye, Father. Do not think of what you have done. I forgive you,” passed peacefully away.