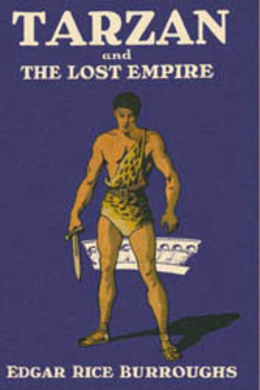 Tarzan and the Lost Empire

Tarzan and a young German find a lost remnant of the Roman Empire hidden in the mountains of Africa. This novel is notable for the introduction of Nkima, who serves as Tarzan’s monkey companion in it and a number of later Tarzan stories. It also reintroduces Muviro, first seen in Tarzan and the Golden Lion, as sub-chief of Tarzan’s Waziri warriors.

Nkima danced excitedly upon the naked, brown shoulder of his master. He chattered and scolded, now looking up inquiringly into Tarzan’s face and then off into the jungle.

“Something is coming, Bwana,” said Muviro, sub-chief of the Waziri. “Nkima has heard it.”

“And Tarzan,” said the ape-man.

“The big Bwana’s ears are as keen as the ears of Bara the antelope,” said Muviro.

“Had they not been, Tarzan would not be here today,” replied the ape-man, with a smile. “He would not have grown to manhood had not Kala, his mother, taught him to use all of the senses that Mulungu gave him.”

“A party of men,” replied Tarzan.

“Perhaps they are not friendly,” suggested the African. “Shall I warn the warriors?”

Tarzan glanced about the little camp where a score of his fighting men were busy preparing their evening meal and saw that, as was the custom of the Waziri, their weapons were in order and at hand.

“No,” he said. “It will, I believe, be unnecessary, as these people who are approaching do not come stealthily as enemies would, nor are their numbers so great as to cause us any apprehension.”

But Nkima, a born pessimist, expected only the worst, and as the approaching party came nearer his excitement increased. He leaped from Tarzan’s shoulder to the ground, jumped up and down several times and then, springing back to Tarzan’s side, seized his arm and attempted to drag him to his feet.

“Run, run!” he cried, in the language of the apes. “Strange Gomangani are coming. They will kill little Nkima.”

“Do not be afraid, Nkima,” said the ape-man. “Tarzan and Muviro will not let the strangers hurt you.”

To Nkima, as to the other denizens of the jungle, Tarzan was no Tarmangani, no white man. He was of the jungle. He was one of them, and if they thought of him as being anything other than just Tarzan it was as a Mangani, a great ape, that they classified him.

The advance of the strangers was now plainly audible to everyone in the camp. The Waziri warriors glanced into the jungle in the direction from which the sounds were coming and then back to Tarzan and Muviro, but when they saw that their leaders were not concerned they went quietly on with their cooking.

A tall Negro warrior was the first of the party to come within sight of the camp. When he saw the Waziri he halted and an instant later a bearded white man stopped beside him.

For an instant the white man surveyed the camp and then he came forward, making the sign of peace. Out of the jungle a dozen or more warriors followed him. Most of them were porters, there being but three or four rifles in evidence.

Tarzan and the Waziri realized at once that it was a small and harmless party, and even Nkima, who had retreated to the safety of a near-by tree, showed his contempt by scampering fearlessly back to climb to the shoulder of his master.

“Doctor von Harben!” exclaimed Tarzan, as the bearded stranger approached. “I scarcely recognized you at first.”

“God has been kind to me, Tarzan of the Apes,” said von Harben, extending his hand. “I was on my way to see you and I have found you a full two days march sooner than I expected.”

“We are after a cattle-killer,” explained Tarzan. “He has come into our kraal several nights of late and killed some of our best cattle, but he is very cunning. I think he must be an old lion to outwit Tarzan for so long.

“But what brings you into Tarzan’s country, Doctor? I hope it is only a neighborly visit and that no trouble has come to my good friend, though your appearance belies my hope.”

“I, too, wish that it were nothing more than a friendly call,” said von Harben, “but as a matter of fact I am here to seek your help because I am in trouble–very serious trouble, I fear.”

“Do not tell me that the Arabs have come down again to take slaves or to steal ivory, or is it that the leopard men are waylaying your people upon the jungle trails at night?”

“No, it is neither the one nor the other. I have come to see you upon a more personal matter. It is about my son, Erich. You have never met him.”

“No,” said Tarzan; “but you are tired and hungry. Let your men make camp here. My evening meal is ready; while you and I eat you shall tell me how Tarzan may serve you.”

As the Waziri, at Tarzan’s command, assisted von Harben’s men in making their camp, the doctor and the ape-man sat cross-legged upon the ground and ate the rough fare that Tarzan’s Waziri cook had prepared.