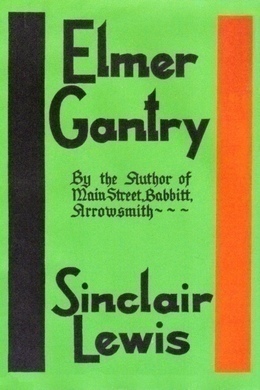 Universally recognized as a landmark in American literature, Elmer Gantry scandalized readers when it was first published, causing Sinclair Lewis to be ‘invited’ to a jail cell in New Hampshire and to his own lynching in Virginia. His portrait of a golden-tongued evangelist who rises to power within his church–a saver of souls who lives a life of duplicity, sensuality, and ruthless self-indulgence–is also the record of a period, a reign of grotesque vulgarity, which but for Lewis would have left no trace of itself. Elmer Gantry has been called the greatest ,most vital, and most penetrating study of hypocrisy that has been written since the works of Voltaire.

Elmer Gantry was drunk. He was eloquently drunk, lovingly and pugnaciously drunk. He leaned against the bar of the Old Home Sample Room, the most gilded and urbane saloon in Cato, Missouri, and requested the bartender to join him in “The Good Old Summer Time,” the waltz of the day.

Blowing on a glass, polishing it and glancing at Elmer through its flashing rotundity, the bartender remarked that he wasn’t much of a hand at this here singing business. But he smiled. No bartender could have done other than smile on Elmer, so inspired and full of gallantry and hell-raising was he, and so dominating was his beefy grin.

“All right, old socks,” agreed Elmer. “Me and my room-mate’ll show you some singing as is singing! Meet roommate. Jim Lefferts. Bes’ roommate in world. Wouldn’t live with him if wasn’t! Bes’ quarterback in Milwest. Meet roommate.”

Elmer and Jim Lefferts retired to a table to nourish the long, rich, chocolate strains suitable to drunken melody. Actually, they sang very well. Jim had a resolute tenor, and as to Elmer Gantry, even more than his bulk, his thick black hair, his venturesome black eyes, you remembered that arousing barytone. He was born to be a senator. He never said anything important, and he always said it sonorously. He could make “Good morning” seem profound as Kant, welcoming as a brass band, and uplifting as a cathedral organ. It was a ‘cello, his voice, and in the enchantment of it you did not hear his slang, his boasting, his smut, and the dreadful violence which (at this period) he performed on singulars and plurals.

Luxuriously as a wayfarer drinking cool beer they caressed the phrases in linked sweetness long drawn out:

Strolling through the shaaaaady lanes, with your baby-mine, You hold her hand and she holds yours, and that’s a very good sign That she’s your tootsey-wootsey in the good old summer time.

Elmer wept a little, and blubbered, “Lez go out and start a scrap. You’re lil squirt, Jim. You get somebody to pick on you, and I’ll come along and knock his block off. I’ll show ‘em!” His voice flared up. He was furious at the wrong about to be suffered. He arched his paws with longing to grasp the non-existent scoundrel. “By God, I’ll knock the tar out of um! Nobody can touch MY roommate! Know who I am? Elmer Gantry! Thash me! I’ll show um!”

The bartender was shuffling toward them, amiably ready for homicide.

“Shut up, Hell-cat. What you need is ‘nother drink. I’ll get ‘nother drink,” soothed Jim, and Elmer slid into tears, weeping over the ancient tragic sorrows of one whom he remembered as Jim Lefferts.

Instantly, by some tricky sort of magic, there were two glasses in front of him. He tasted one, and murmured foolishly, “‘Scuse me.” It was the chase, the water. But they couldn’t fool him! The whisky would certainly be in that other lil sawed-off glass. And it was. He was right, as always. With a smirk of self-admiration he sucked in the raw Bourbon. It tickled his throat and made him feel powerful, and at peace with every one save that fellow–he could not recall who, but it was some one whom he would shortly chastise, and after that float into an Elysium of benevolence.

The barroom was deliriously calming. The sour invigorating stench of beer made him feel healthy. The bar was one long shimmer of beauty–glowing mahogany, exquisite marble rail, dazzling glasses, curiously shaped bottles of unknown liqueurs, piled with a craftiness which made him very happy. The light was dim, completely soothing, coming through fantastic windows such as are found only in churches, saloons, jewelry shops, and other retreats from reality. On the brown plaster walls were sleek naked girls.

He turned from them. He was empty now of desire for women.

“That damn’ Juanita. Jus’ wants to get all she can out of you. That’s all,” he grumbled.

But there was an interesting affair beside him. A piece of newspaper sprang up, apparently by itself, and slid along the floor. That was a very funny incident, and he laughed greatly.

He was conscious of a voice which he had been hearing for centuries, echoing from a distant point of light and flashing through ever-widening corridors of a dream.

“We’ll get kicked out of here, Hell-cat. Come on!”

He floated up. It was exquisite. His legs moved by themselves, without effort. They did a comic thing once–they got twisted and the right leg leaped in front of the left when, so far as he could make out, it should have been behind. He laughed, and rested against some one’s arm, an arm with no body attached to it, which had come out of the Ewigkeit to assist him.

Then unknown invisible blocks, miles of them, his head clearing, and he made grave announcement to a Jim Lefferts who suddenly seemed to be with him:

“I gotta lick that fellow.”