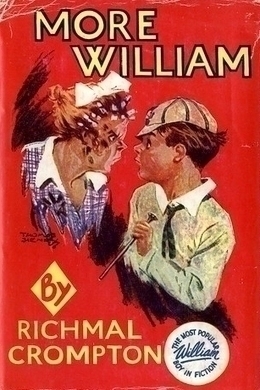 When Aunt Lucy tells William that ‘a busy day is a happy day’, William does his best to keep himself very busy indeed. Unfortunately, not everyone appreciates his efforts to cheer up Christmas Day - and when a conjuring trick with an egg goes very badly wrong, William finds himself in more trouble than ever! These fourteen fantastic Just William stories are as funny as ever.

William awoke and rubbed his eyes. It was Christmas Day–the day to which he had looked forward with mingled feelings for twelve months. It was a jolly day, of course–presents and turkey and crackers and staying up late. On the other hand, there were generally too many relations about, too much was often expected of one, the curious taste displayed by people who gave one presents often marred one’s pleasure.

He looked round his bedroom expectantly. On the wall, just opposite his bed, was a large illuminated card hanging by a string from a nail–“A Busy Day is a Happy Day.” That had not been there the day before. Brightly-coloured roses and forget-me-nots and honeysuckle twined round all the words. William hastily thought over the three aunts staying in the house, and put it down to Aunt Lucy. He looked at it with a doubtful frown. He distrusted the sentiment.

He leapt lightly out of bed and dressed. Then he began to arrange his own gifts to his family. For his father he had bought a bottle of highly-coloured sweets, for his elder brother Robert (aged nineteen) he had expended a vast sum of money on a copy of “The Pirates of the Bloody Hand.” These gifts had cost him much thought. The knowledge that his father never touched sweets, and that Robert professed scorn of pirate stories, had led him to hope that the recipients of his gifts would make no objection to the unobtrusive theft of them by their recent donor in the course of the next few days. For his grown-up sister Ethel he had bought a box of coloured chalks. That also might come in useful later. Funds now had been running low, but for his mother he had bought a small cream-jug which, after fierce bargaining, the man had let him have at half-price because it was cracked.

Singing “Christians Awake!” at the top of his lusty young voice, he went along the landing, putting his gifts outside the doors of his family, and pausing to yell “Happy Christmas” as he did so. From within he was greeted in each case by muffled groans.

He went downstairs into the hall, still singing. It was earlier than he thought–just five o’clock. The maids were not down yet. He switched on lights recklessly, and discovered that he was not the only person in the hall. His four-year-old cousin Jimmy was sitting on the bottom step in an attitude of despondency, holding an empty tin.

Jimmy’s mother had influenza at home, and Jimmy and his small sister Barbara were in the happy position of spending Christmas with relations, but immune from parental or maternal interference.

He relapsed into despondency.

Innumerable slimy iridescent trails shone over hats, and coats, and umbrellas, and wall-paper.

“Huh!” grunted William, who was apt to overwork his phrases. “They’ve got out right enough.”

He looked at the tracks again and brightened. Jimmy was frankly delighted.

William’s thoughts flew back to his bedroom wall–“A Busy Day is a Happy Day.”

“Let’s clean it up!” he said. “Let’s have it all nice an’ clean for when they come down. We’ll be busy. You tell me if you feel happy when we’ve done. It might be true wot it says, but I don’t like the flowers messin’ all over it.”

Investigation in the kitchen provided them with a large pail of water and a scrubbing-brush each.

For a long time they worked in silence. They used plenty of water. When they had finished the trails were all gone. Each soaked garment on the hat-stand was sending a steady drip on to the already flooded floor. The wall-paper was sodden. With a feeling of blankness they realised that there was nothing else to clean.

It was Jimmy who conceived the exquisite idea of dipping his brush in the bucket and sprinkling William with water. A scrubbing-brush is in many ways almost as good as a hose. Each had a pail of ammunition. Each had a good-sized brush. During the next few minutes they experienced purest joy. Then William heard threatening movements above, and decided hastily that the battle must cease.

“Backstairs,” he said shortly. “Come on.”