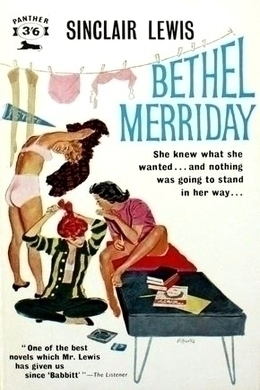 On her sixth birthday Bethel’s mother caught her imitating the slouching, slow walk of an old woman and rebuked her for generally showing off, speaking up in Church and in this case for copying people. Bethel said, “Oh! I’m not copying her. I’m trying to be her. I can be a lot of different people.” Sinclair Lewis’s novel about the theater woos the senses with the smell of shabby costumes, cramped dressing rooms, and what makes actors and actresses do what they do, for what is often very little money.

That was the first time that anyone ever called her an actress– June 1st, 1922, Bethel’s sixth birthday. There was no spotlight, no incidental music, and her only audience were her mother and a small dog looking regretfully through the window of a boarding- house. But she was sensational.

Her mother and she were on their way to the A. & P. Store, and as usual Bethel had with the greatest violence been running in circles. She was slight and small and entirely feminine, but she was the best runner in her neighbourhood.

She stopped, then moved with a queer slow hitching. In front of them an old lady was scraping along, sunk forward from her shoulders as though she had given up all hope of ease and love. Her whole life seemed to be in her painfully sliding feet. Bethel tried to recreate that dejected walk, and she went at it so earnestly that the back of her neck ached with the weight of sagging shoulders, and every step was a frightened effort.

‘Oh! I’m not copying her. I’m trying to be her. I can be a lot of different people.’

‘My, aren’t we grown-up! I’m afraid that you like to show off, dear–the way you always say your text so loud in Sunday school.’

‘I love to say texts! “I will praise thee, O Lord, with my whole heart. I will show forth all thy marvellous works”.’

‘It all sounds like maybe you’re going to be an actress. I guess that wouldn’t be a bad text for an actress.’

‘Look how the poor old lady’s heels are run down,’ said Bethel, too busy with her career for prophecies of glory.

Bethel was born in 1916, on the day after the Battle of Jutland. Her father, kneeling by the bed, had prayed, ‘Dear Lord, please make this baby a child of peace and justice–yes, and happiness, Lord’.

Five months after the six-year-old Bethel gave her imitation of the old lady, the Black Shirts marched bravely into the maws of the movie cameras in Rome; and five months after that, Hitler bounded out of a Munich beer garden. But perhaps it was as important that at this time John Barrymore was playing Hamlet and Pauline Lord Anna Christie and the Theatre Guild producing Back to Methuselah. They were so much less stagy.

Herbert Merriday, Bethel’s father, was a dealer in furniture, to which, later, he was importantly to add electric refrigerators and radios. They lived in Sladesbury, a city of 127,000, in central Connecticut, a fount of brassware, hardware, arms, precision instruments, clocks. Here is the renowned establishment of Lilydale & Duck, makers of machine-guns for killing policemen and revolvers for killing gangsters and the Duck Typewriter for joyfully chronicling both brands of killing.

Sladesbury is Yankee, not Colonial, and it envies and scorns the leisurely grace of Litchfield and Sharon. It proclaims itself constantly as ‘modern’, and is beginning to boast of being ‘streamlined’.

Even for Sladesbury, the Merriday family stood high in modernity. They had been the first family to have a radio installed in their car, and Mrs. Merriday, though she was a solid Universalist, was so advanced as to belong to the Birth-Control League.

In May of 1931 Bethel was almost fifteen, and finishing sophomore year in high school. It was suitable to the neighbourhood modernity that her brother Benny, now twenty-one, should be working in the Dutton Aeroplane Works, and talking about designs for transatlantic clippers, talking about (though never actually reading) the Bible by Karl Marx, and that the girls she knew should be talking about careers. They wanted homes and babies as much as their mothers had, but none of them expected to be entirely supported by husbands. Most of them were, they asserted, going to be aeroplane hostesses, motion-picture stars or radio artists, though certain of the less studious sort confessed that they would not mind being ‘hostesses’ in the large dance halls.

Bethel could not look upon serving cold consommé at an altitude of a mile, or dancing the rumba, as having much meaning. She was learning touch typewriting in high school–that was her father’s one insistence about her studies–and she could become a secretary, busy and important, receiving the boss’s magnificent callers. But privately, ever since her sixth birthday, she had yearned to be an actress.