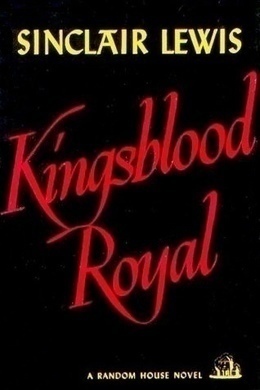 A neglected tour de force by the first American to win the Nobel Prize in literature, Kingsblood Royal is a stirring & wickedly funny portrait of a man who resigns from the white race. When Neil Kingsblood a typical middle-American banker with a comfortable life makes the shocking discovery that he has African-American blood, the odyssey that ensues creates an unforgettable portrayal of two Americas, one black, one white. As timely as when it was first published in 1947, one need only open today’s newspaper to see the same issues passionately being discussed between blacks & whites that we find in Kingsblood Royal, says Charles Johnson. Perhaps only now can we fully appreciate Sinclair Lewis’s astonishing achievement.

Mr. Blingham, and may he fry in his own cooking-oil, was assistant treasurer of the Flaver-Saver Company. He was driving from New York to Winnipeg, accompanied by Mrs. Blingham and their horrible daughter. As they were New Yorkers, only a business trip could have dragged them into this wilderness, and they found everything west of Pennsylvania contemptible. They laughed at Chicago for daring to have skyscrapers and at Madison for pretending to have a university, and they stopped the car and shrieked when they entered Minnesota and saw a billboard advertising “Ten Thousand Lakes.”

Miss Blingham, whom they called “Sister,” commented, “Unless you had a New York sense of humor, you would never be able to understand why that sign is so funny!”

When they came to their first prairie hamlet in Minnesota, six cottages, a garage, a store and a tall red grain elevator, Mrs. Blingham giggled, “Why, they’ve got an Empire State Building here!”

“And all the Svensons and Bensons and Hensons go up to the Rainbow Room every evening!” gurgled Sister.

Their laughter buoyed them for a hundred miles, till it was time to think of lunch. Miss Blingham looked at the map. “Grand Republic, Minnesota. That seems to be about forty miles from here, and it’s quite a village–85,000 people.”

“Let’s try it. They ought to have some sort of a hotel to eat at,” yawned Mr. Blingham.

“All the best people there eat at the Salvation Army Shelter!” yelped Mrs. Blingham.

When, from the bluffs of the Sorshay River, they looked down to the limestone shaft of the Blue Ox National Bank Building and the welter of steel and glass sheds that had been erected for the Wargate Wood Products Corporation since 1941, Mr. Blingham said, “Fair-sized war plant they got there.”

Since the beginning of World War II, Grand Republic had grown from 85,000 to 90,000. To some ninety thousand immortal souls, it was the center of the universe, and all distances were to be measured from it; Moscow was defined as a place 6,100 miles from Home, and Saudi Arabia as a market for Wargate wallboard and huts and propellers. The Blinghams, who knew that the true center of the solar system is the corner of Fifth Avenue and Fifty-seventh Street, would have been irritated to find out how many of the simpletons in the valley below them believed that New York contained nothing but hotels, burlesque shows, a ghetto and Wall Street.

Mrs. Blingham urged, “Come on. We can’t waste all day looking at this dump. The hotel-guide gives the Pineland as the best place for chow. Let’s try it.”

They did not notice them, but on the way to the Pineland they must have passed scrollwork palaces of 1880, an Italian Catholic Church, a pawn-shop in which a Lithuanian lumberjack had recently pawned the Luger pistol with which he had murdered a Siamese mining-camp cook, the best women’s dress-shop between Fort William and Dallas, a Victoria Cross aviator, and a Negro clergyman who was a Doctor of Philosophy.

In front of the tapestry-brick, nine-storied Hotel Pineland (designed by Lefleur, O’Flaherty, and Zipf of Minneapolis), Mr. Blingham said doubtfully, “Well, I suppose we can get SOME kind of grub here.”

They thought it very funny that the more choosy of the two restaurants in the Pineland should presumptuously be named “The Fiesole Room,” though they would not have found it funny if they had known that locally it was pronounced “Feesoly,” because that was how the Blinghams pronounced it, also.

The Fiesole Room had, for cinquecento atmosphere, Pompeian-red walls, majolica dishes, a Spanish wine-jar on either side of the doorway, and a frieze of antique Grecian runners done by a local portrait-painter.

“My, my, don’t they put on the dog in–what’s the name of this town again?” mocked Sister.

“No, that’s the furniture, where Aunt Ella comes from. This,” said Mrs. Blingham authoritatively, after looking at the map, “is Grand Republic.”

“What a silly name!” pronounced Sister. “Sounds like Fourthajuly. Oh, God, these hicks!”

They were elaborately escorted to a table by the headwaiter, a dignified, erect colored man whose head resembled a brown billiard ball. They did not know that he was Drexel Greenshaw, the leader of the conservative wing of the Negro Community. He looked like a bishop, like a general, like a senator, any of whom he might have been if he had chosen another calling than table-waiting and another color.

Mr. Blingham had the Hungarian goulash. Mrs. Blingham was bold in the matter of roast lamb. Sister took the chicken salad, snapping at the colored waiter, “And do try to have a little chicken in it, will yuh?”