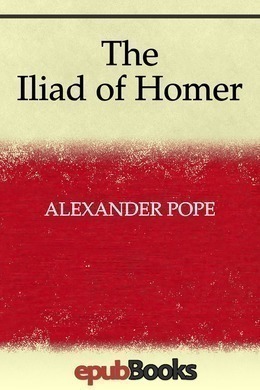 The Iliad of Homer

Pope had been fascinated by Homer since childhood and in 1713 announced his plans to publish a translation of the Iliad. The work would be available by subscription, with one volume appearing every year over the course of six years. Pope secured a revolutionary deal with the publisher Bernard Lintot, which brought him two hundred guineas a volume, a vast sum at the time. His translation of the Iliad appeared between 1715 and 1720. It was acclaimed by Samuel Johnson as “a performance which no age or nation could hope to equal” (although the classical scholar Richard Bentley wrote: “It is a pretty poem, Mr. Pope, but you must not call it Homer.”).

In the war of Troy, the Greeks having sacked some of the neighbouring towns, and taken from thence two beautiful captives, Chryseis and Briseis, allotted the first to Agamemnon, and the last to Achilles. Chryses, the father of Chryseis, and priest of Apollo, comes to the Grecian camp to ransom her; with which the action of the poem opens, in the tenth year of the siege. The priest being refused, and insolently dismissed by Agamemnon, entreats for vengeance from his god; who inflicts a pestilence on the Greeks. Achilles calls a council, and encourages Chalcas to declare the cause of it; who attributes it to the refusal of Chryseis. The king, being obliged to send back his captive, enters into a furious contest with Achilles, which Nestor pacifies; however, as he had the absolute command of the army, he seizes on Briseis in revenge. Achilles in discontent withdraws himself and his forces from the rest of the Greeks; and complaining to Thetis, she supplicates Jupiter to render them sensible of the wrong done to her son, by giving victory to the Trojans. Jupiter, granting her suit, incenses Juno: between whom the debate runs high, till they are reconciled by the address of Vulcan.

The time of two-and-twenty days is taken up in this book: nine during the plague, one in the council and quarrel of the princes, and twelve for Jupiter’s stay with the Æthiopians, at whose return Thetis prefers her petition. The scene lies in the Grecian camp, then changes to Chrysa, and lastly to Olympus.

Achilles’ wrath, to Greece the direful spring Of woes unnumber’d, heavenly goddess, sing! That wrath which hurl’d to Pluto’s gloomy reign The souls of mighty chiefs untimely slain; Whose limbs unburied on the naked shore, Devouring dogs and hungry vultures tore. Since great Achilles and Atrides strove, Such was the sovereign doom, and such the will of Jove!

Declare, O Muse! in what ill-fated hour Sprung the fierce strife, from what offended power Latona’s son a dire contagion spread, And heap’d the camp with mountains of the dead; The king of men his reverent priest defied, And for the king’s offence the people died.

For Chryses sought with costly gifts to gain His captive daughter from the victor’s chain. Suppliant the venerable father stands; Apollo’s awful ensigns grace his hands By these he begs; and lowly bending down, Extends the sceptre and the laurel crown He sued to all, but chief implored for grace The brother-kings, of Atreus’ royal race

“Ye kings and warriors! may your vows be crown’d, And Troy’s proud walls lie level with the ground. May Jove restore you when your toils are o’er Safe to the pleasures of your native shore. But, oh! relieve a wretched parent’s pain, And give Chryseis to these arms again; If mercy fail, yet let my presents move, And dread avenging Phoebus, son of Jove.”

The Greeks in shouts their joint assent declare, The priest to reverence, and release the fair. Not so Atrides; he, with kingly pride, Repulsed the sacred sire, and thus replied:

“Hence on thy life, and fly these hostile plains, Nor ask, presumptuous, what the king detains Hence, with thy laurel crown, and golden rod, Nor trust too far those ensigns of thy god. Mine is thy daughter, priest, and shall remain; And prayers, and tears, and bribes, shall plead in vain; Till time shall rifle every youthful grace, And age dismiss her from my cold embrace, In daily labours of the loom employ’d, Or doom’d to deck the bed she once enjoy’d Hence then; to Argos shall the maid retire, Far from her native soil and weeping sire.”

The trembling priest along the shore return’d, And in the anguish of a father mourn’d. Disconsolate, not daring to complain, Silent he wander’d by the sounding main; Till, safe at distance, to his god he prays, The god who darts around the world his rays.

“O Smintheus! sprung from fair Latona’s line, Thou guardian power of Cilla the divine, Thou source of light! whom Tenedos adores, And whose bright presence gilds thy Chrysa’s shores. If e’er with wreaths I hung thy sacred fane, Or fed the flames with fat of oxen slain; God of the silver bow! thy shafts employ, Avenge thy servant, and the Greeks destroy.”