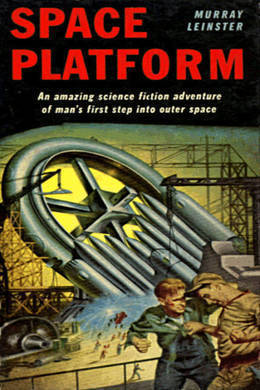 Space Platform tells of man’s first step into outer space … of the difficulties and dangers of reaching for the stars. It is also an exciting adventure. When young Joe Kenmore came to Bootstrap to install pilot gyros in the Platform he hadn’t bargained for sabotage or murder or love. But Joe learned that ruthless agents were determined to wreck the project. He found that the beautiful girl he loved, and men like The Chief, a rugged Indian steelworker, and Mike, a midget who made up for his size by brains, would have to fight with their bare hands to make man’s age old dream of space travel come true! Long before extended space travel became a reality, prolific science fiction author Murray Leinster created a richly detailed scenario in which a project that bears a striking resemblance to the International Space Station is being planned and executed. However, several nefarious factions want the planned expedition to fail. Can unlikely hero Joe Kenmore salvage the project?

There wasn’t anything underneath but clouds, and there wasn’t anything overhead but sky. Joe Kenmore looked out the plane window past the co-pilot’s shoulder. He stared ahead to where the sky and cloud bank joined–it was many miles away–and tried to picture the job before him. Back in the cargo space of the plane there were four big crates. They contained the pilot gyros for the most important object then being built on Earth, and it wouldn’t work properly without them. It was Joe’s job to take that highly specialized, magnificently precise machinery to its destination, help to install it, and see to its checking after it was installed.

He felt uneasy. Of course the pilot and co-pilot–the only two other people on the transport plane–knew their stuff. Every imaginable precaution would be taken to make sure that a critically essential device like the pilot gyro assembly would get safely where it belonged. It would be–it was being–treated as if it were a crate of eggs instead of massive metal, smoothed and polished and lapped to a precision practically unheard of. But just the same Joe was worried. He’d seen the pilot gyro assembly made. He’d helped on it. He knew how many times a thousandth of an inch had been split in machining its bearings, and the breath-weight balance of its moving parts. He’d have liked to be back in the cargo compartment with it, but only the pilot’s cabin was pressurized, and the ship was at eighteen thousand feet, flying west by south.

He tried to get his mind off that impulse by remembering that at eighteen thousand feet a good half of the air on Earth was underneath him, and by hoping that the other half would be as easy to rise above when the gyros were finally in place and starting out for space. The gyros, of course, were now on their way to be installed in the artificial satellite to be blasted up and set in an orbit around the Earth as the initial stage of that figurative stepladder by which men would make their first attempt to reach the stars. Until that Space Platform left the ground, the gyros were Joe’s responsibility.

The plane’s co-pilot leaned back in his chair and stretched luxuriously. He loosened his safety belt and got up. He stepped carefully past the column between the right- and left-hand pilot seats. That column contained a fraction of the innumerable dials and controls the pilots of a modern multi-engine plane have to watch and handle. The co-pilot went to the coffeepot and flipped a switch. Joe fidgeted again on his improvised seat. Again he wished that he could be riding in back with the crates. But it would be silly to insist on perching somewhere in the freight compartment.

There was a steady roaring in the cabin–the motors. One’s ears got accustomed to it, and by now the noise sounded as if it were heard through cushions. Presently the coffeepot bubbled, unheard. The co-pilot lighted a cigarette. Then he drew a paper cup of coffee and handed it to the pilot. The pilot seemed negligently to contemplate some dozens of dials, all of which were duly duplicated on the right-hand, co-pilot’s side. The co-pilot glanced at Joe.

“Thanks,” said Joe. He took the paper cup.

The co-pilot said: “Everything okay with you?”

“I’m all right,” said Joe. He realized that the co-pilot felt talkative. He explained: “Those crates I’m traveling with—-. The family firm’s been working on that machinery for months. It was finished with the final grinding done practically with feather dusters. I can’t help worrying about it. There was four months’ work in just lapping the shafts and balancing rotors. We made a telescope mounting once, for an observatory in South Africa, but compared to this gadget we worked on that one blindfolded!”

Joe said ruefully: “Still I’d feel better riding back there with them.”

“Sabotage bad at the plant?” asked the co-pilot. “Tough!”

“Sabotage? No. Why should there be sabotage?” demanded Joe.

The co-pilot said mildly: “Not quite everybody is anxious to see the Space Platform take off. Not everybody! What on earth do you think is the biggest problem out where they’re building it?”

“I wouldn’t know,” admitted Joe. “Keeping the weight down? But there is a new rocket fuel that’s supposed to be all right for sending the Platform up. Wasn’t that the worst problem? Getting a rocket fuel with enough power per pound?”

The co-pilot sipped his coffee and made a face. It was too hot.